One of the problems with experiencing the Outer Hebrides is for the rest of your life trying to describe the place to anyone who hasn’t seen it. If you were to take yourself and stand upon a point looking out across the Atlantic and see nothing – then you would be right – the Hebrides will have nothing for you. If all you see is rock, water and limitations to keep you occupied in terms of manmade attraction then that in turn is what you’ll find here. If however, you look out and see an expanse of glittering unlimited freedom, a child’s playground of undisturbed wildlife and peace so dense you could apply it as a balm, then that in turn is what you’ll see. In my first week here I was told ‘The islands are what you make of them’ and like most things the islanders say it’s a rather solid observation. Those who seek the magic of the place will undoubtable find it. For when the winter sun hits, the waters sparkle with a thousand glinting sun pennies and so clear, it could be swapped for the Mediterranean without immediate notice. You can see way beneath the surface down into rocky beds, teaming with creatures all willing to create tiny communities and homes for just a few hours before the tide changes its mind again. You can pick out the waving shades of fresh Hebridean seaweeds and pick up the tiniest pink shells smaller than a child’s fingernail, smooth and streaked pale as jersey cream. The power of the ocean thrashes upon the edging rocks and the sound is so engulfing you could be inside one of those huge shells you lift to you ear, that I always associate with the magic of childhood imagination. Yet some days a stillness descends and in the crisp air water sits as clear as glass mirroring the mountain above, deep and with absolute precision that you’re compelled to get out of your car just to see if you can still break the water. The wind will touch every cell on your skin and comb every hair on your head. The magic of the Hebrides is yours – those who seek will find.

That in essence is the best way that I can describe my first handful of weeks here – magical. Of course, there have been times of overwhelming emotion as the children have cried endlessly and the terrible twos have set root. Or when, as we stepped into our new house, the final leg of our journey, the daunting task of settling two children – and myself – into yet another new place was upon us and being so weary I wanted to cry. So please do not think that when I use the word magic it’s because daily life has been elevated to some high ledge where only the gods can see me. But more that the physical landscape shines so brightly that if I could bottle it, and I mean truly bottle it, you’d have something that would touch the realms of the true beauty on this earth. I don’t mean how beautiful someone may appear to look or how awe inspiring a landscape may be. I mean deep beauty. The kind you feel well up inside of you till you’re not sure what to do with your hands but you know you need to smile and hug tightly.

The final stretch in our journey finally came and moving into our new house was upon us. From October to January as Chris left us in the dark early mornings, with newborn and toddler in tow I stole every single moment to pack, sell or discard the items of our life. I very literally mean that. My life became about putting things away. We all lived out of bags for weeks on end and to a degree we became rather good at it. But now I was being asked to put things on shelves, store things and unwrap much loved pictures – it was daunting. I was also painfully aware that I hadn’t really seen the inside house. Apart from a couple of images taken on a phone and then a quick dazed visit the day after we arrived when the house had yet to have its work done. Where was the staircase? – I couldn’t remember – but there was that little window at the back – where was that again? What did the kitchen look like again Chris? – and so it went. Family and friends would enquire what the house was like and deep down I honestly didn’t know. It dawned on me that I may have bitten off more than I could chew in terms of hoping for a good outcome and that I did in fact have two small children to raise in this house. Being a full time stay at home mum means that my work place is through my front door. If the house wasn’t right it was going to make ‘working’ in it tough and most daunting of all I knew that if that was the case it was in fact tough.

Nestled deep into the side of the mountain, cocooned by wild heathers clinging to the rocks, is Fasgadh. Fasgadh meaning shelter and protection in Gaelic, is one of the first houses you will come to as you clink off the ferry and is the reason I said yes to the house without even having seen it. To me, a home is where you wait out the pouring rain. Keeping your children warm and safe, but fundamentally its somewhere to hide away from the world when you need too. Fasgadh in my mind represented that. It’s what I needed, it’s what I craved and most of all when we stepped into the hall it’s what it was. Many people when we moved asked me why, they still do, and my answers always consist of Chris and the children. Which is true. What I fail to mention, is that actually I moved for me, because over the last few years on mainland I had come to feel like that of a penguin stuck in a sauna. Knowingly in the wrong place, although unable to move for fear of getting hotter and ending up in a huge flap anyway due to standing still for too long. This wasn’t because I was unhappy but more because it just wasn’t truly right for me.

As we opened the front door – each clutching a child in hand – I took a deep breath and realised as it slowly filtered out, that in fact what I’d bitten off was manageable. In fact it was more than edible and although the giant task of getting beds ready, lunches made, cots built, children washed and put to bed all whilst trying to clamber over bags of washing, boxes of books and most of all an abundance of children’s toys loomed, it was going to be ok. The house, beautiful and warmed with the heating already on, invited us in from the door, and called itself home. But now with the door shut, nappies to change and lunch to make it really was all hands on deck to which we only had four but could probably have done with eight. “Where do we start?” Containing Bea was a good place – so with the highchair assembled a bag of milky buttons and crisps opened we got to work with moving bags out from the living room and set to work on assembling our donated couch into the middle of it. By evening we’d put up one tv, one couch, two cots and one king size bed into which we all happily nested. We were here, we were home but most importantly, we were asleep. 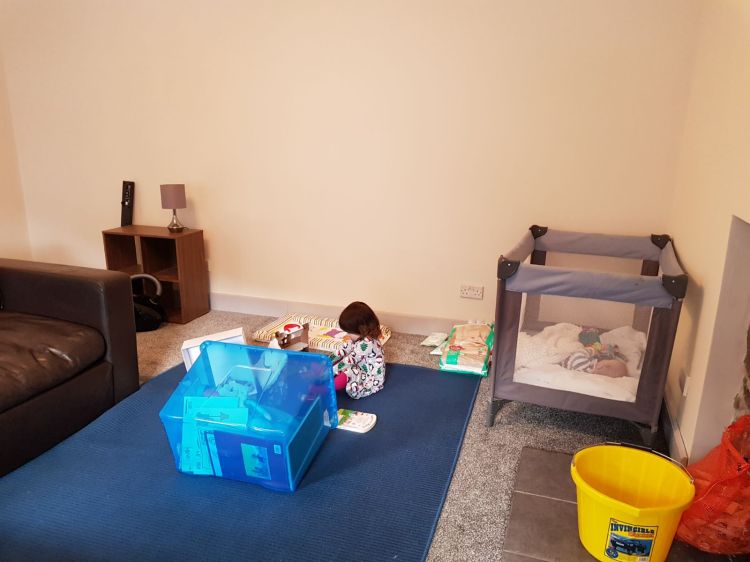 Fasgadh is unlike any house I have ever lived in. It is truly Scottish. To which I mean, solid, wholesomely practical but undeniably beautiful. Spread width ways, the majority of the windows line the front of the house catching the light for most of the day. The living room consists of two bay windows – deep enough to sit in and watch the weather change- and a large fuel burner set into the thick stone.

A large entrance, breakfast room and kitchen run along the other side with two masters and one smaller bedroom upstairs. With three bathrooms, two pantry’s and one very large airing cupboard both with shelves up to the ceiling – a housewife’s dream – making up the rest. The stairs climb up the back of the house with another large bay window to greet you as you do. So tucked into the rock is the house that from here I can count the pin pricked buds of the varying heather and each mossy strand of fern which grows upon it. Echoing the nearby Atlantic the windows are dressed in varying hues of blues, throughout the day into which myself and Bea climb to witness the drama of the weather – much to the amusement of passers by but more over to the delight of Bea. 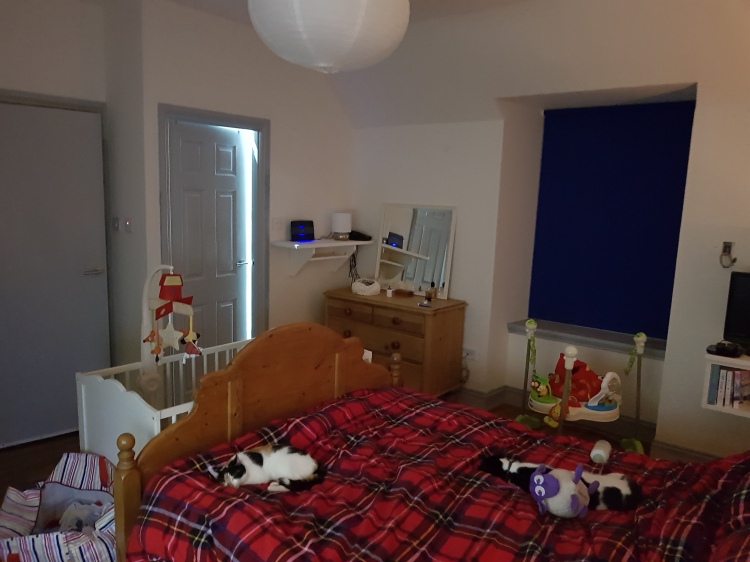 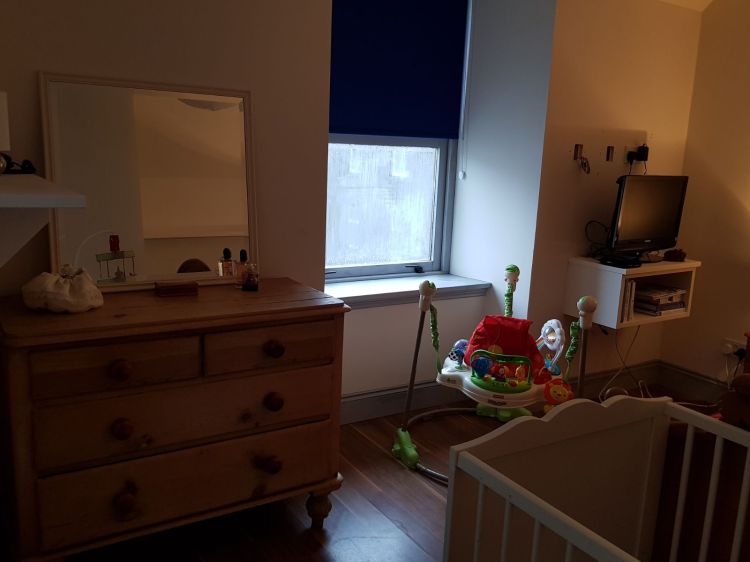 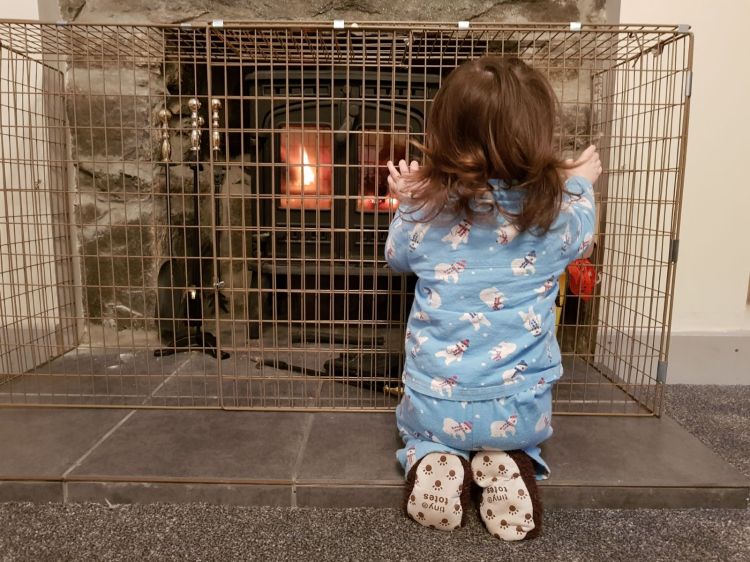 There were of course moments of teething. Mentally making notes of all the things you should have asked when asked ‘Do you have any questions’, like how does the shower work and what do we burn on the fire? Our fuel burner, of which now befriended we have now christened Monty, regardless of the locals advice, was like a stubborn all be it happy dog on a beach refusing to answer your call. It would light and then diminish, we got cold, I got cross, from the shop keeper to the bar man – advice was given – chris like any man refused to confess that he could not light a fire but I had no pride on the matter, I wanted heat and I didn’t care from who it arrived. However we did laugh at feeling rather metropolitan and thought the locals were probably finding our constant lack of ability with the thing rather amusing. I unpacked much loved paper backs, took out my grandmothers biscuit tin and the tiny painting my mum gifted me on a birthday past, put up a calendar, plugged in a few lamps, lit a couple of candles and felt as if we had always been here.

It is truly a home to live, grow and raise children in. An undemanding shelter of stone to love, laugh and create in. If you do find yourself lucky enough to be rolling off the ferry here at Tarbert you will undoubtable see us and I do urge you to wave at the children in the window. Most likely chocolate covered and franticly waving in all but pampers nappies. It’s hard to believe only six weeks has passed since we started the car – Harris bound. When so much change takes place in such a short time frame it’s very easy to under estimate what you have in fact achieved as the days whirl and the small triumphs get lost in the everyday energy needed to put tiny people to bed. Lots of people say to me that we were very brave to make such a move – I don’t however, necessarily agree with this – more sensible – more that I didn’t think too far in advance really. It has however been a demanding one, both on us as parents and as individuals. But, above all the shimmering sun pennies and all the tiny shells you can fit into your palm of your toddlers hand, I’m not standing still in a sauna anymore so the journey starts here.

To any penguins stuck in a sauna and those who help them out.

You can now find me over on Instagram @islandwife_hebrides for daily uploads of life in the Hebrides as well as live videos of our adventures in this beautiful part of the world.

24 thoughts on “To any penguins stuck in a sauna”