One of my first initial thoughts after moving to Harris was my amazement at the sheer number of sheep here. Add that to the fact that lambing season is yet to begin and you’ve got quite a community. In fact the number of sheep here far outweighs the number of people in the Outer Hebrides. Nature reigns supreme. I’ve never visited anywhere on this earth where anything but the traffic has right of way on the roads like I’ve experienced in Harris and Lewis. Sheep roam freely, and why not this is their land. If you so happen to turn the corner and there stands a sheep well its tough until it moves- and it will when it feels like it- and if it doesn’t you wait. Its as simple as that. Every stubborn sheep is a simple reminder that speed is not welcome, their islands move more gently than that – this is where they live and you just happen to be here too. 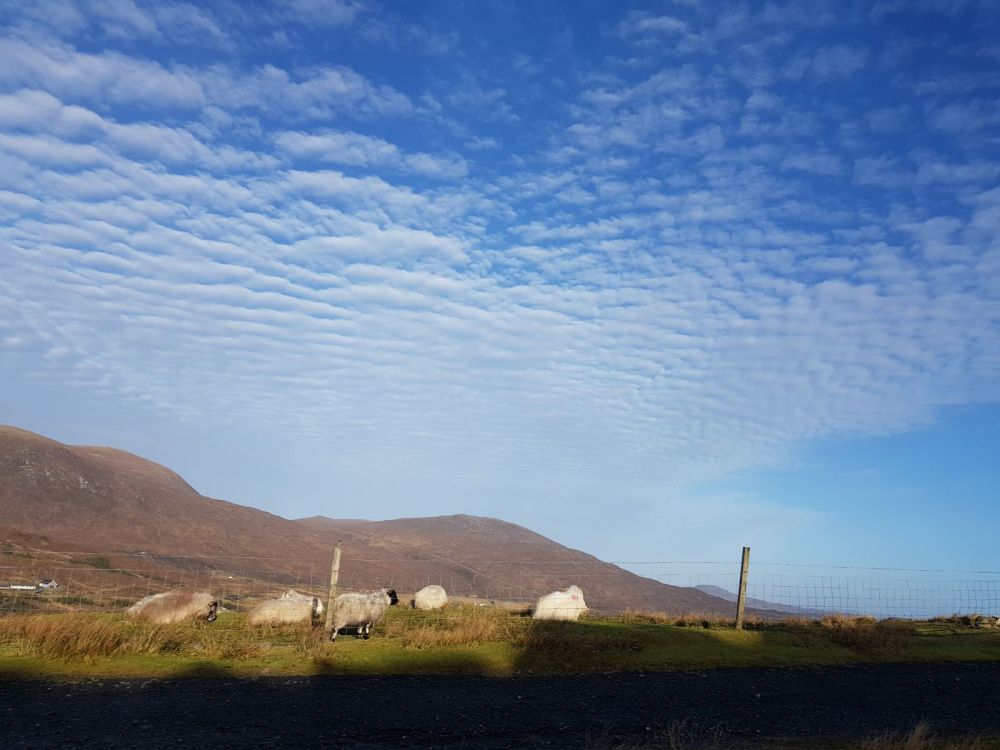 As well as acclimatising to the changing weather – although I’m certain it will take a few more months before I don’t notice the wind – the hills have also stopped springing up on me. Now they are just a quiet reminder that some things in this life are unwavering however fast the pace. I don’t think my mind will ever cease with amazement when we travel to the edge of Tarbert and the Atlantic ocean opens up into such an expanse of tropical blue that Rosamunde Pilcher would struggle to do it justice. Even in the winter sun its majestic. I’m told the winters are long here and I don’t doubt it. We’ve been here now for the entirety of the new year, and credit where its due January is a hard month in anyones book. I do however favour wintery months over summery ones which has taken the edge of ……. slightly. The snow has fallen thick on the tops of the Harris hills these past weeks and as the temperature increases, with it the snow has melted to create huge waterfalls all over the mountains sides. Gushing, icy fresh and so clear you can see the rocks beneath. When I first arrived  on the island the sun was going down incredibly early and coming up even later than I have ever experienced on mainland, but even now that is changing and spring has started to appear in the cracks and creases of the landscape.  If I can survive the winter, then I can certainly survive what summer brings.

We are now in our first handful of days in Fasgadh – our new family home. The holiday cottage had been our haven for the first four weeks as we navigated our new beginning but now we can really start to call the Hebrides home. In our search in finding a new house we had a lot of help and talked at great length about where that should be. Not having been here it meant putting my trust into other peoples eyes and judgement. Coming from what in comparison is a metropolis to Harris, we needed to step down gently rather than desiring to be out in solitude right away.  You could say Tarbert is the central hub of Harris. With the new school, library and swimming pool. The soft play area and meeting point for the mother and toddler group. I was really pleased to find the library just on my door step after a few days of arriving here. When chris was here last the new school had yet to materialise and with it came a public library. We use the soft play area throughout the week too. Letting ourselves in, Bea runs off to whizz down the slide and I make a much needed brew after the climb up the hill with two under two. As well as speaking English, Gaelic is spoken and taught in the Outer Hebrides. Bea loves books and like with most things its the best place to start. Noah and Bea will both grow up speaking Gaelic although I don’t yet know a word – I think I better start learning before secret sibling conversations begin to sprout. 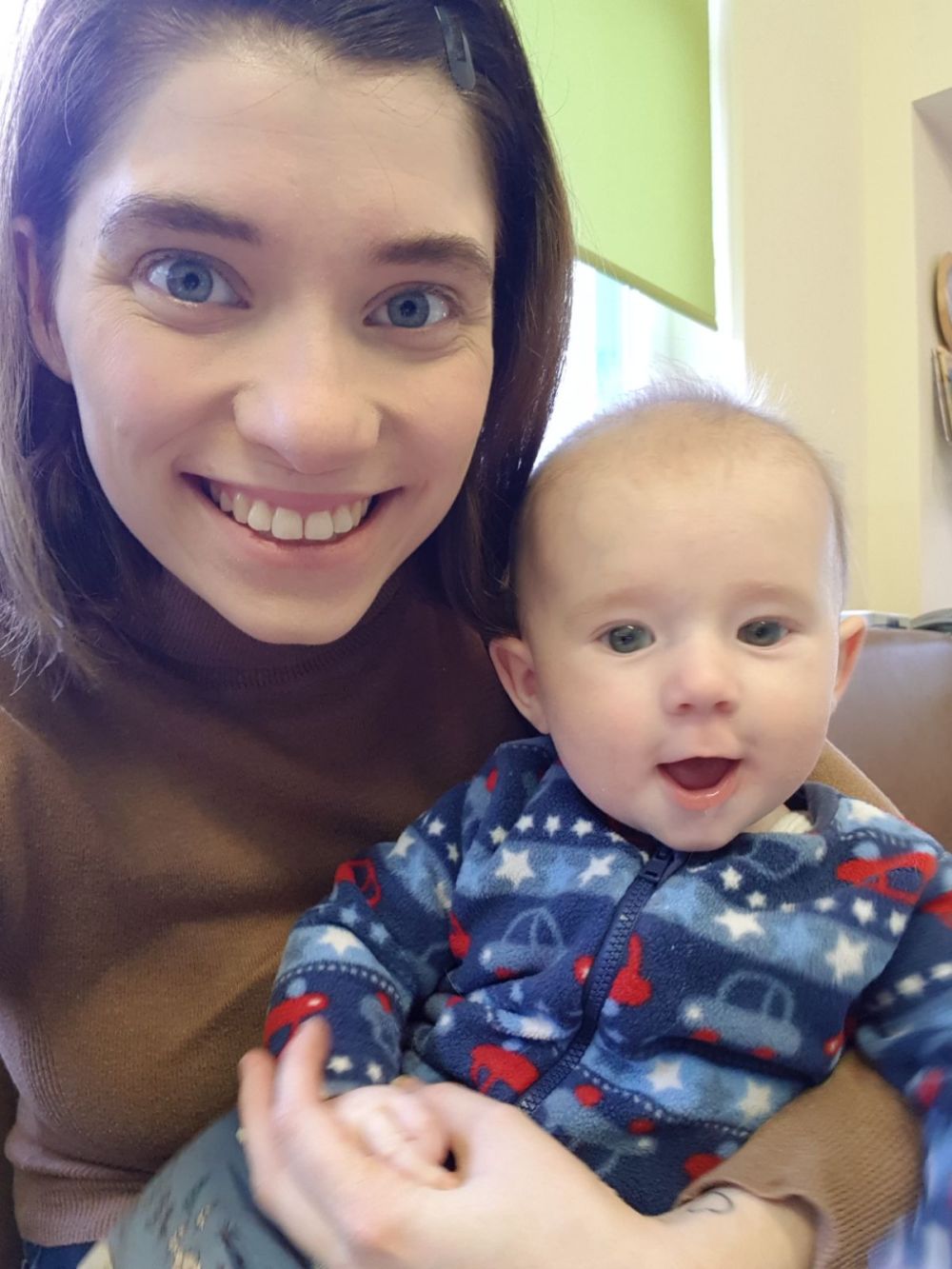 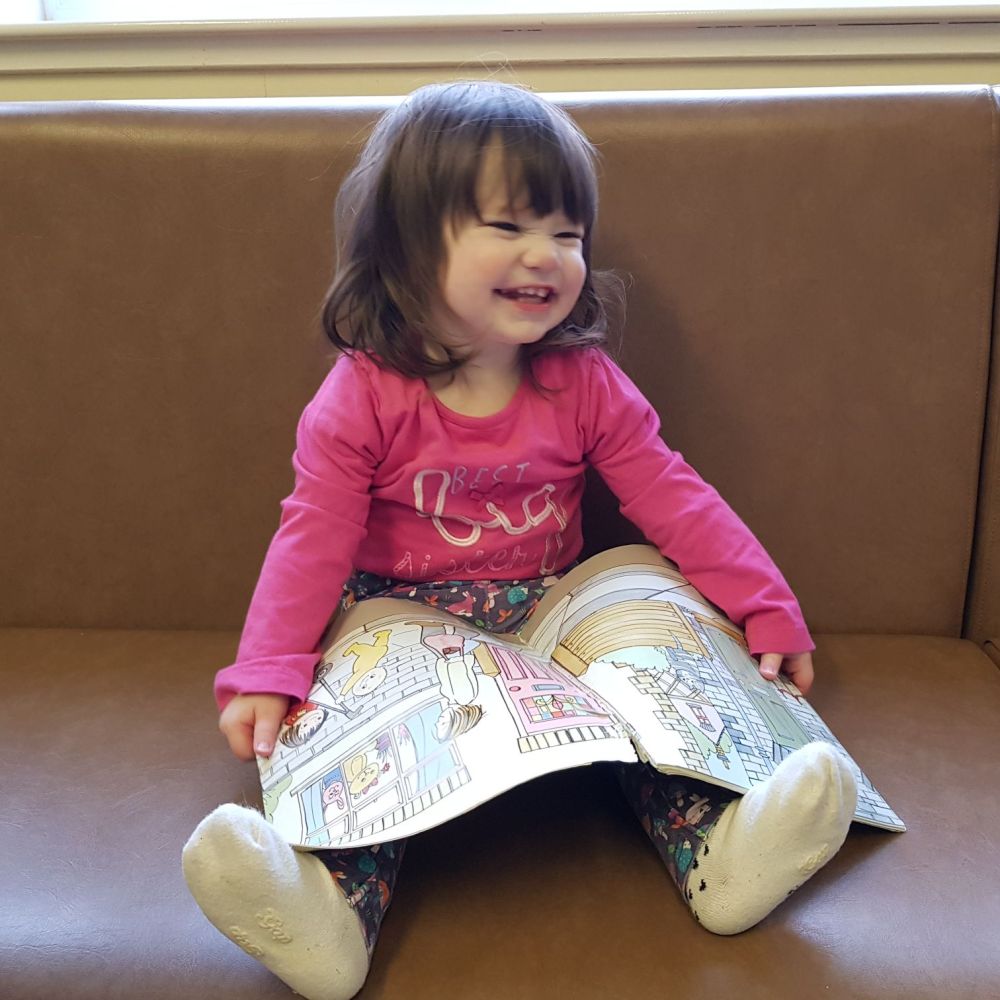 In the Centre of Tarbert there’s the community centre and Hotel, as well as the ferry terminal and the Harris gin distillery. There’s the famous Harris tweed, there’s even a wee charity shop and a Harris candle shop too. The post office and Harris trust buildings and then there’s the shops you need for groceries. And these I’ll admit are my favourite. There’s three main shops here in Tarbert and in these you can buy most things that you will need. AD’s and Brownies remind me of Newsagents in Lancashire when I was very young, all family run and owned. In these you’ll find refrigerators filled with milk, cheeses and Charles Macleod meats – the nicest sausages and pies I have ever tasted- fresh fruit, shelves for canned goods, magazines, comics, jars of sweets, postcards and a small butcher counter in AD’s also. Then there’s Akram’s a Tardis collection of everything and anything you may need. From jeans, shoes, kettles, cups, envelopes, notepads, shampoos and soap to name a very select few. If you need it you’ll most probably find it in there. We do also travel into Lewis and up to Stornoway. Here there’s a small Tesco – about the size of a Tesco express on the mainland and there’s a co-op too. Which sells fresh flowers and bread! 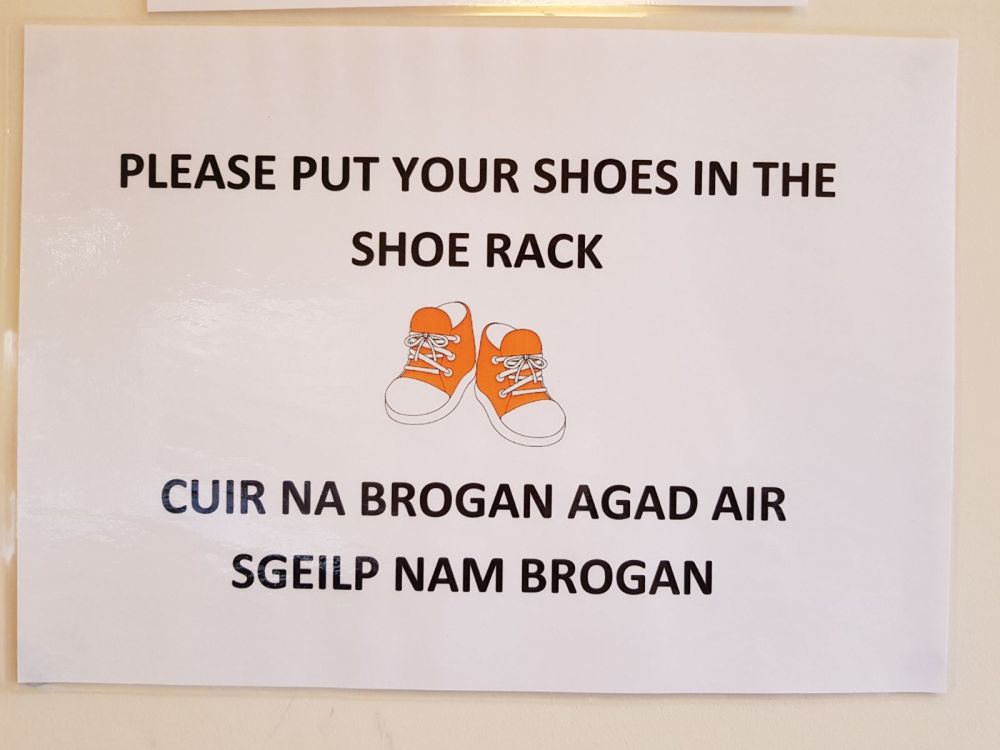 Yes there may not be everything you want here but there is everything you need and if island living suits you, to which I can confidently say it does, it wont bother you all too much. There are however a few things I find myself missing, Chinese takeaways for one – although there is one in Stornoway, to which Chris keeps promising we will pick up and bring home for tea one day. We both however, with wishful sideways glances, know that we would most probably just eat in on the journey home regardless of time, and much to the delight of Bea.

Sheep and shopping aside, I think the biggest change we’ve undergone is the change within ourselves. In our first month we’ve spent more quality time together than the last two years combined. I’ll admit that says a lot more about us than I care to write but it also speaks volumes about the environment we are living in. On our way to Stornoway last week I made everyone jump from their seats including myself, as I found myself shouting ‘RAINBOW RAINBOW!’ with ear deafening glee. Finding myself unable to stop and pointing with such vigour the situation became increasingly hilarious. With chris trying to hide an already grinning smirk we found ourselves laughing at my startling outburst and well the sheer beauty of the rainbow really. I thought to myself would I have even seen the rainbow back home? Because if you want a solid comparison drawn on island life to mainland its that there is time to look at the sky here and its easy to spot the rainbows that might appear in it because there’s little else to clutter it up. You can hear the thoughts in your head and the emotions that go along with them. Thinking about it, isn’t that what we all fundamentally need as human beings – to be able to look at the sky and hear ourselves think. Cluttered or uncluttered.

The open air and hills would bring perspective and silence to anyone’s mind. In no way am I saying that in moving up here the stresses and worries that family life bring have ebbed and flowed away with the tide. Of course I’m not. To insinuate that would be silly and to believe it would be naïve. The days of  two under two have long to reign and they get the best of anyone wherever on this globe you are. But those days are now just days, they aren’t repetitive disasters. 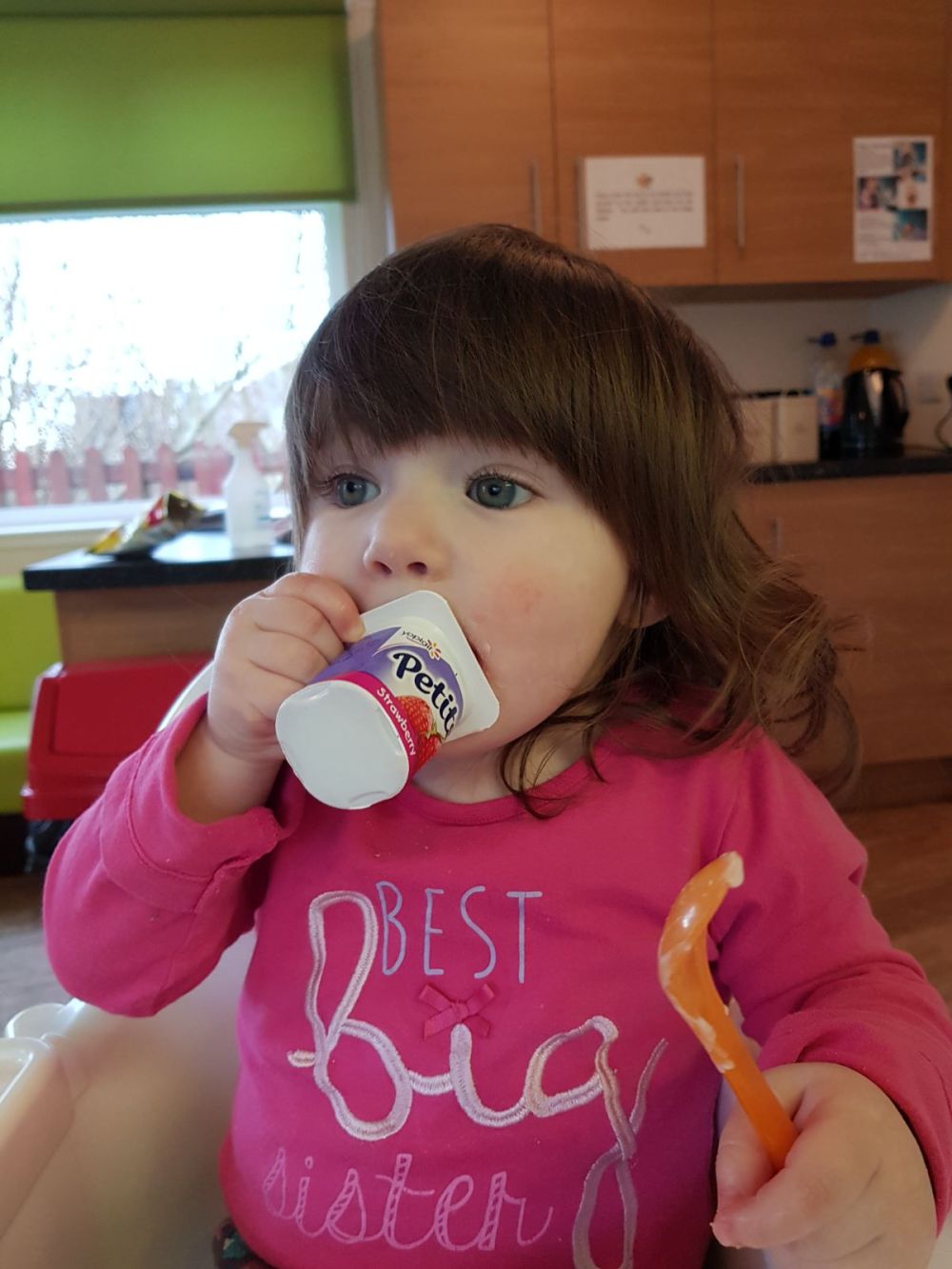 Is island life harder? Well yes in some ways; more patience is needed not everything is readily available for you. You cant just pop down to a shopping centre because there aren’t any. With children you have to be more organised than you already are making sure you have everything you’ll need in advance. There’s a smaller pool of online shops you can use due to some charging higher postage rates or some not offering shipping at all. Argos, Amazon and Next seem to be the ones to go to. Being at the mercy of the ferry and therefore the mercy of the weather everything takes a little longer than on mainland. But as a whole no, if anything its easier. I don’t have traffic to worry about- well not like that on mainland anyway and especially now in the winter months. I have yet to hear a single siren which if anything is the biggest culture shock I have prominently noticed and honestly it involves a lot less stress. Because there’s a lot less to get stressed about. Maybe because there’s less people or maybe its because there’s less things. I’m not entirely sure but collectively it works.

Our life on mainland had become that of paddling in a small boat against a gaining current – increasingly impossible and no one wins against mother nature anyway. You could say the Hebridean people here know that all to well and more over accept it. That’s why life has remained in essence a little simpler here – and maybe where mainland living is off course. Everyone trying to swim upstream to grasp something that isn’t really what their after anyway. Now I’m not stating that people here don’t better themselves, that in point of fact is what we’ve done, but always wanting, wanting, wanting is different and when seen at a distance its as clear as that of a nonchalant sheep on a mountain road. In not having things readily on my doorstep I’ve realised they don’t hold much importance anyway. There’s no 24 hour super stores here, shops shut on a Sunday and some even shut daily for lunch. It isn’t just wanting less there’s an apparent needing less here which is by far the biggest difference I’ve encountered.

Someone said to me ‘Its like taking a big breath’. It is. Deep breaths to bring laughter in the evenings once again and connections in the wee small conversations that let love and care back in. Our move has been our solace and the Harris hills have played their part. Whilst watching as the early winter sun dips down into them, its hard to comprehend why anyone would want any brighter lights other than those shining up in the nights sky. But they do, and that’s ok too.

To the deep breaths we should all take when we cross the Scottish boarder.

You can find me on Instagram @islandwife_hebrides for daily uploads on life in the Hebrides and videos of our adventures in this beautiful part of the world.

29 thoughts on “To deep breaths, and those who take them”