As the air has warmed and the wind has died, the midges have descended. Its a sure sign of summer arriving in the Hebrides, even when the sky does not always mirror it. Small tiny flies with one hell of a bite leaving one hell of an itch. Wrapping its way around the island the great expanse of water in front of the house has been a hive of differing activity. Dolphins have frolicked past much to my delight. Seals slip in and out of the oceans ceiling with exasperated snorts. Whilst the gannets swirling vast and free with the tip of their wings dipped in the night, like bright white lights can be seen diving into the water from a frightening height in order to feed. Shooting through the air before looping back and down – SMACK – shattering the waters surface like glass. Falling stars, spiralling, lost to the oceans bed. All busy. All with an agenda. All with something, someone, to feed back home. All travelling the width and breath of land and water with a quiet endurance. The Hebridean experience comes with a medicinal dose of wildlife. Along with its weather plains and oceans currents the waters encasing its rolling lands holds an elixir of magic. Concocted only in Scotland. A little like its whisky.

For someone who isn’t a keen swimmer I spend an awful amount of time staring at the water. I have little to no desire, to be in it or on it, but stare at it I could for ever. In fact one of my favourite things about living in the Hebrides is watching the water still its tide. Creating a strange chemical like reaction that turns the water a pearly turquoise. Transparent as your kitchen window, perilous rocks and dark clumps of seaweed swaying in the ebb and flow of the tide reveal themselves beneath. Making big inky blotches on the surface, the oceans edges become like well used blotting paper. And then in startling comparison when the waves arch and crash and the water rages as if trying to grab and haul herself onto the land. Hurling everything from her floor like a toddler in a fit throwing toys. Loud and unapologetic for making a mess. That’s my favourite too. Equally creative, majestic and extreme. Frightening but beautiful, making up for the long lulls of greyness in-between. The in-between doesn’t really interest me. In-between’s tend not to. But the extremes I have found, are where the Scottish magic hides. Its the thing people cant quite put their finger on when they get here. Its the thing people long for when they leave. Painfully, I have learnt that such magic on its own is not enough. Like the creatures that we share the landscape with, islanders need a stamina and endurance to match in order to survive here. Charm and beauty alone will not sustain you through the Hebridean race. It is not a sprint to a well marked finish line. It isn’t even a gentle jog around the park. Its a long uphill marathon against the wind. The kind where you underestimated just how vast and high the mountain really is. Believe me, my running shoes are well worn.

My intrigue in wildlife has grown over the handful of years I have now lived in Scotland and I could keep you entertained with various stories of all kinds of creatures. Another day perhaps. For really the islands people is where my mind intrigues really lies and stories of those I have in abundance. During my first summer on Harris – I came across a man. A man who combing the beach, had found an object the sea – deciding she no longer valued – had spat out at him. Terry didn’t know what it was. Did anyone else? I did! Oh I did. I knew instantly. I knew that what Terry had found was a sea bean and I was desperate to see it. Could Terry come and show it to me? Yes of course! He would be over to show it to me ‘sometime’. Now in true Harris time where I learnt ‘sometime’ to mean in the next five minutes or next five months, I forgot about it and so it appeared had Terry. It did cross my mind that I didn’t know Terry and had this been the mainland I would not have dreamt of asking an unknown man from the internet to come over to show me something he’d found on a beach. This, however, was Harris, risk was low and this was after all a sea bean. ‘So its a pebble?’ Chris said. ‘A Pebble! A pebble!? Its a sea bean Chris! A SEA BEAN!’ ‘I don’t know what that is Lucy’. From which I took my queue to spring into violent abandon, exasperatingly proclaiming the journey and plot of the elusive sea bean through modern dance. Chris, who having been married to me long enough to find this neither strange nor time wasting sat back and watched. Grinning in love and the occasional laugh.

But Terry, true to his word did show up one day. Sitting on the front steps of Fasgadh, Tarbert in the mid summer heat, a tallness obstructed the sunlight, casting a darkness over the black and white print I was living through. Drawing my attention up and away from the pages of a Cornish love affair. My gaze met the eyes of a man who handed me a sea bean. Sea beans, fairy eggs, drift seeds, Molucca nuts, all names for these strange mythical seeds. Having fallen from the vines in the West Indies they travel across the great expanse of the wild Atlantic Ocean by the gulf stream and north East Atlantic current. Travelling well over 15 months before washing up on the shores of Iceland, Norway, Ireland, the Faroe islands and of course those of the Hebrides. They have fascinated me long before relocating to Scotland was even a seed in my own life. Easy to find they are not. Mostly because they look like pebbles. Some are even quite small. As well as pale in colour and so they blend into the sand totally unnoticed, but the one Terry had found was not. As large as my palm, as rich and dark as pure coco. ‘Entada gigas’ is the exact name. It was without a doubt a special thing. A little bit strange, fictitious even, a true treasure of the sea. 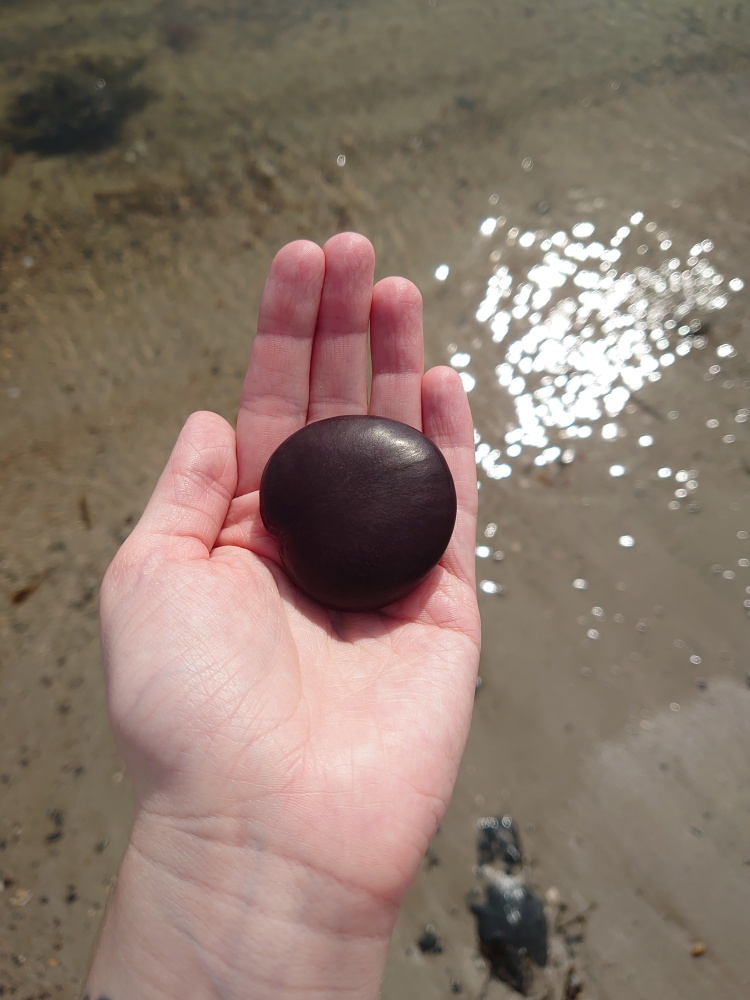 The Irish placed them under pillows to ward off fairies in the night. The Scot’s believed houses that stored a sea bean were safe from fire. In the Hebrides they were hollowed out and used for snuff. Even a rattle for a baby where the kennel had come loose in its casing is recorded. My favourite use for them has to be the childbirth charm. Naming them ‘Kidney of Mary’, midwives would bind them in various metals and place them around their necks. Thrust into the grasp of labouring women they were said to save them from near death and aid the arrival of healthy babies. To sell them was to bring misfortune but to gift them was considered luck. Passed down to each mother through the generations, they were even gifted at weddings. I could bore you half to death with the origin and history of the things. Or, being a little kinder drift you off to sleep, but I’m no historian. Their history is far beyond the small perimeter of my word. Undertaking a transoceanic journey that pushes far beyond the depth of my limited imagination and endurance.

Terry, stood before me as I overturned the smooth bean in my hand. Tall and broad shouldered. Suited in worn denim jeans, baseball cap and T- shirt, he reminded me of the Canadian men I had seen as a young girl. Other than the sea bean I can’t remember what we talked about or for how long. He was, I remember, a gentle man with a soft voice and kind eyes. His large weathered hands took the bean from mine, placing it safely into his back jean pocket before disappearing into a neighbouring house of a man I knew to be ill. And that was Terry. I’ve never come across another one, try though I might. I am sure the sea with her strange sense of humour has kept many a hidden from me underfoot Although I’ve glued my eyes upon the sand. The seas way of telling me to stop looking at me feet I suppose, but I do often think about them. These insignificant beans, no bigger or special than a rock. Enduring thousands of miles in time and space. Bringing with them a charm that only human history would bind and spell into something extraordinary. For aren’t we all like the sea bean? Placed into a loved ones hand when the pain of life is hard to take. How we, dropping from the vine are tossed and turned through life’s ocean’s currents. Until beached upon the bay of life’s hard realities we find ourselves at our destination. Some to be picked up. Cherished, admired, prayed upon and passed through generations with a family name. Some thrust down into the deep sands by a heavy handed heel. Forced to silently endure the darkness until the tide comes again. For eventually it always does. Washing us into the blotting paper and sweeping us out into the worlds current. All of us, enduring something we did not expect. Just so we may tell a story at the end.

Months, rounding up into a small number of years have past me since meeting Terry. The days have run through my fingers like gushing water. Moments building into memories like a child stacking primary coloured blocks one on top of the other. Wavering precariously high in the air now until buckling under the weight of ill design – THUD! – ‘All fall down!’. No no, the thud had happened. Bringing out from the confines of my head and back into my living room with a similar feeling. Ah! The post man. Hauling myself up from sitting I emptied the last dregs of cold tea from the bottom of the cup and went to retrieve whatever had been dumped on the small patch of cold concrete that makes up the porch. Or, as I like to all it, the wind beater. Blocked in capitals – LUCY MARTIN – marked the front of a small cardboard box in wiry ink. I was not expecting anything. I know the familiar hand writing of loved ones, yet this held no recognition. Along with its unusually light weight the box intrigued me. Wandering into the small galley like kitchen at the back of the house, I took a knife and striking deeply into its side burst the cardboard open. A postcard missing my grasp fluttered downward, overturning mid journey to land sunny side up. Narrowing my eye line to a slit, I titled my head and leaning my body with it read – To Lucy, may this bring you luck, from Terry. A dark shadow became visible inside the thick wadding between my grasp. Now nearing its final destination, the wrapping unfurling, the object was entrusted safely into the palm of my hand. Across the great expanse of the wild Atlantic ocean – with quiet endurance – I held a sea bean.

To Terry, thank you for being part of the journey. Lucy

18 thoughts on “Journey to the Hebrides”