With Elizabeth perched on my hip, the sea expanded before me and a breeze blown from the east warmed my face. It had been consecutively warm for a good handful of days in the Hebrides and I was enjoying the freedom it brought. When I say warm. I mean 12 degrees. Which when paired with little wind is practically tropical here. With my face toward the sun I shut my eyes. Warm inky splodges appeared creating a kaleidoscope of patterns under my lids. Rest. Just for a moment. A wooden train set lay out below my feet and various other instruments of play had been discarded about the garden. For a single breath I was completely still against the horizon, until Noah tugging my skirt began his hourly murmuring for some sort of snack. He could wait. At nearly three he is growing before my eyes and I, to keep the bottomless pit of his stomach lined have become enslaved to feeding it. ‘MAMA MAMA!’ chimed in Bea from across the garden, but deciding that her tone didn’t carry any fear or malice I decided she could wait as well. Just a few seconds longer. Just a few more to myself I uttered under my breath. She’d found some sort of bug among rows of bowing daffodils, eager with joy to show and include me. So plodding on, I went to look at the creature. Whilst my mind, now late in the day calculated and ignored the mass of laundry still to wash. 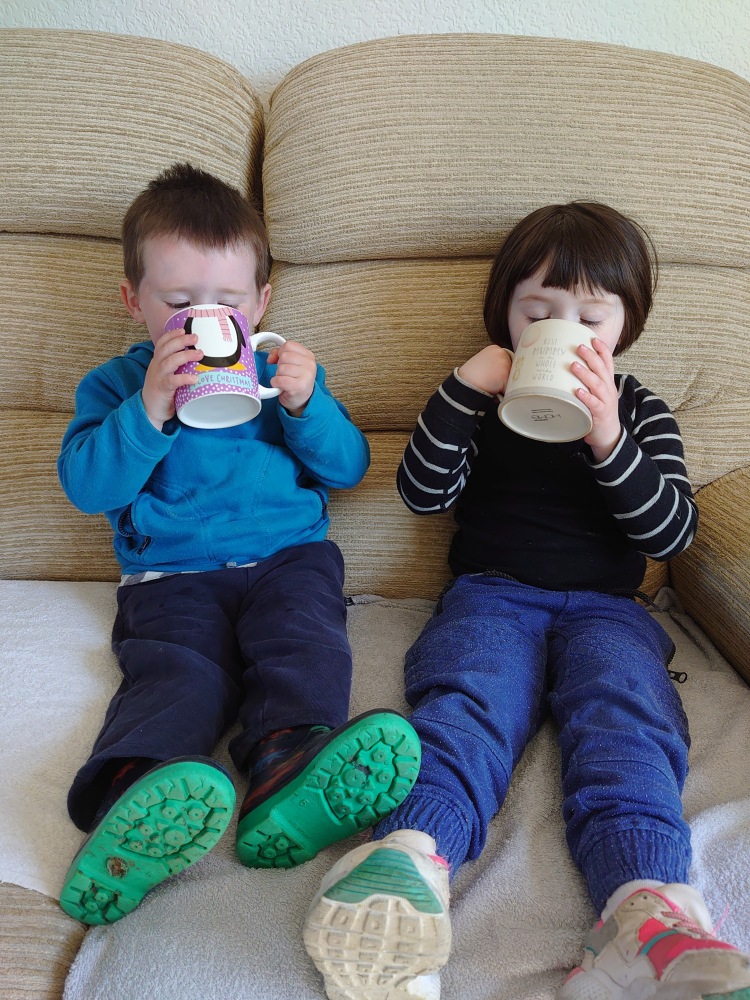 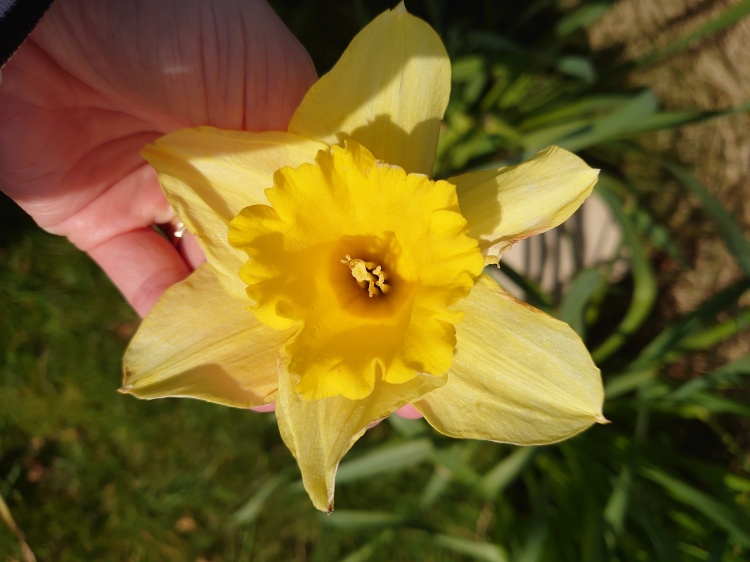 ‘Oh! Its a caterpillar Bea! say hello Mr Caterpillar! How do you do?’ ‘How do you do Mr Caterpillar?’. ‘Do you know who made that caterpillar Bea? God. God made him, and he loves him very much even though hes so very small! How much more do you think God loves you if he loves this teeny little creature a whole heap?’ ‘Ummmmmm I dont know Muma!’ ‘Well its an awful lot Bea. He never forgets this exact Mr Caterpillar and he never forgets you!’ Noah by this point had tottered over. Subsiding his desire to feed the growling gremlin in his tummy and totally uninterested in any biblical education he perched himself forwards like an early bird eager on the days catch. I was in half a mind to tell him that this was not for eating, but hesitated in case he felt up for a challenge. ‘Muma?’ ‘Yes Bea?’ ‘God made him with a lot of feet didn’t he?’ ‘Yes he did Bea’ ‘Goodness Muma, he must have to buy an awful lot of shoes!’. ‘SHOOOES!’ chimed Noah. 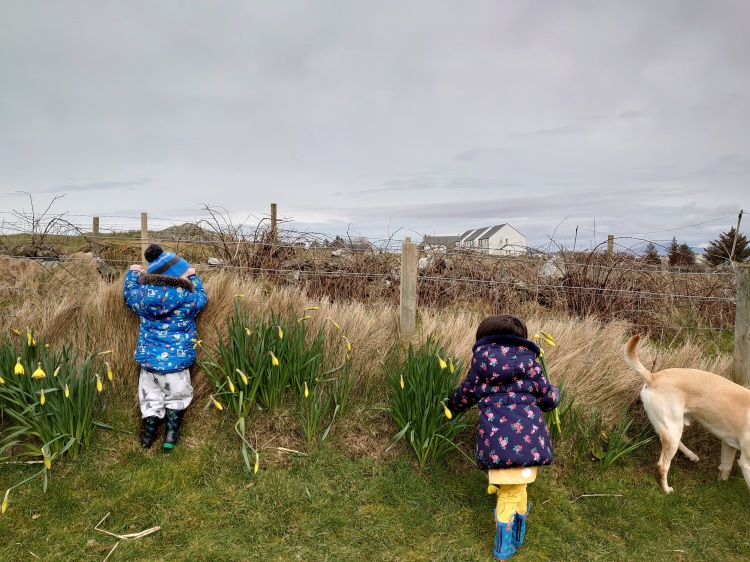 Warm breezy days have brought with them the confidence of hanging washing out that wont be later retrieved frozen stiff nor dripping wet. The sound of flapping sheets to me is as relaxing as the tide rolling in and out of the bay. Like enormous bunting hung high above a village fete it is one of my favourite sights. Stark white sheets against cornflower skies billowing like sails of a homecoming ship on the horizon. Although Chris on a few occasions had madly dashed out to save clothing, which blowing horizontally was booking a one way trip to the states. It is still Scotland after all. 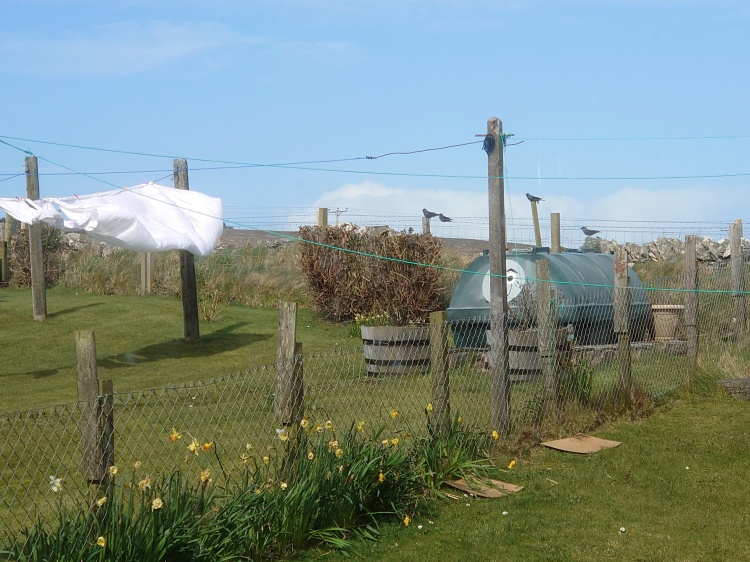 Whilst the globe has spun around the argument of death the garden around me has quietly gotten on with spinning life to those who call it home. Spiders have spun webs to catch the morning dew and birds have reached cacophonous crescendos just when I’ve gotten Elizabeth back to sleep. We have crouched over woodlice. Shapely armoured as if being thrown down a ten pin bowling alley is highly likely. Chatted to a centipede and watched frantic beetles, black and shiny as oil depart in unnecessary panic. Along with two mousy looking wrens. Chris doesn’t like small birds. Once on Harris one of the cats brought in a small bird. Eyes closed and heavy. I got locked in the utility room with a broom until no evidence remained. There’s something rather robotic about birds isn’t there? I don’t know whether you have ever observed one as intently as I have – probably not – but they have a sort of mechanical engineering to them. Like a small music box figurine. Programmed to ‘dance’ turning in small calculated movements. I remember having one as a child with a ballet dancer in a tiny net skirt. It played a twangy sort of tune when you wound the silver key up.

Two small wrens. Always together collecting seed, two by two. Ordinary and totally content in each others fellowship. Companions. Unhurried by the world and its lot. They come down most days never afraid of the towering crows and gulls who greedy in their taking appear like vultures. I often watch them and wonder strange things like ‘Where did they meet and have they been together long’. Dancing around the grass with premeditated movements. A thoughtful tilt of the head, rehearsed footwork, perfected over and over again. There’s something dignified in their manner. I wonder if they have a nest ‘back home’. A tree somewhere with eggs counting on them. What pressure that must be when you have no supermarket that stocks your favourite brand of berry in a clean plastic bag every day. How are they not riddled with worry? How are they content with the daily assumption that it will just ‘be there’. Well reader, I suppose those wrens have more faith than you and I.

We are blessed with a large garden here on Islay and whilst the world has torn itself at the seams we have played in it, ate in it, ran, laughed and jumped in it. Talked ourselves round in circles, grazed knees, worried, cried, soothed, wiped tears and said I’m sorry in it. Whilst the world has twisted and gnarled on its axle, I like the eye of tornado have stood still and observed. I have always been an observer. Participating has either bored or scared me and so I tend to leave it alone. Living on an island brings a certain amount of social distance anyway. Harris in its many shades prepared me for such a drill, and locking down felt neither dramatic or unknown. It was rather comforting. In fact, apart from Chris being home, life for me hasn’t changed. Chris said I’d been socially distancing myself for the past four years anyway. Reader, he’s not wrong. But it did highlight how different my daily life has grown to those back home. It felt strange to hear peoples panic over a lifestyle change that for me was relatively if not totally normal. Living on a Scottish island can be hard, certainly it has a set of sacrifices that not everyone would be willing to give, but island life does come with a simplistic privilege that for the most part cannot brought elsewhere. Of course like anywhere the island has experienced its own set of challenges and level of disruption. Islands thrive off community, woven together for generations to bare well any time of crisis. But growing Island economy is built upon the sandy foundation of tourism. This is a worrying time. However, no tourists doesn’t mean no island – a neighbour is never far away. 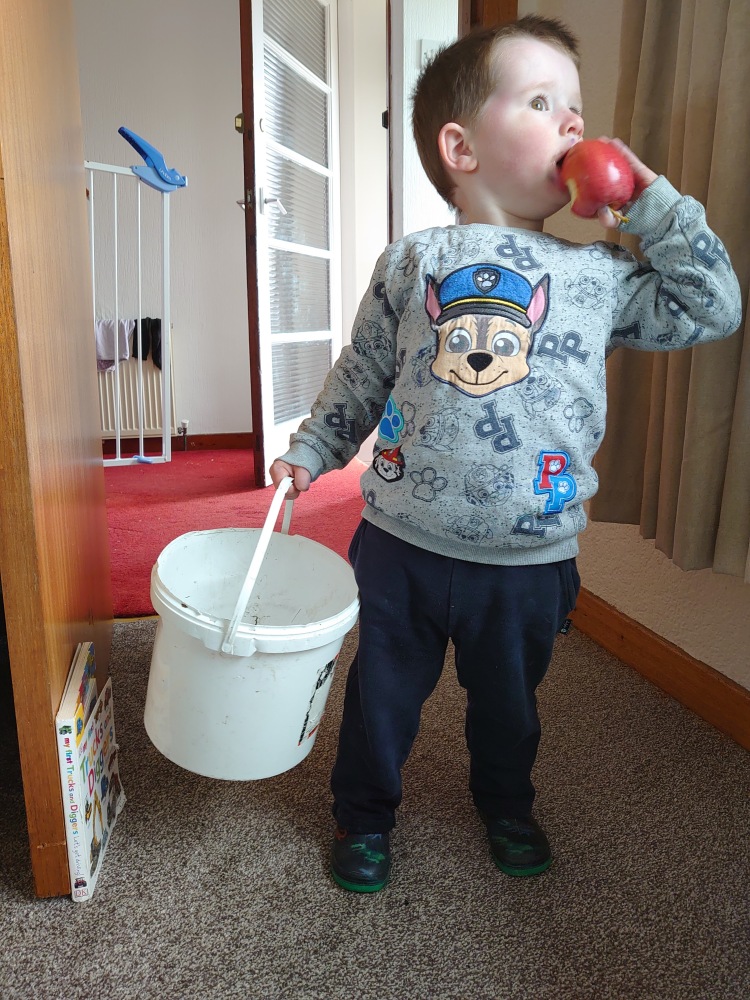 It is very easy at a time like this to feel incredibly small. It is very easy in this large and clumsy world to feel as down right insignificant as a snail heaving itself up the garden path to win a race. Determined yet failing against the heavy footed toddler thundering past it. It is easy to shout ‘Its all too much! I feel so small!’. It is so very easy to take that smallness and equate it to insignificance. It is so easy to descend into panic and chaos – some of us have. It is so easy to rage ‘Where is God! Where is your God in all of this !?’

Reader, it is so easy because we are. We are small in the great cosmic scheme of things, just like the caterpillars and the woodlice in the garden. Like the snails heaving themselves up the garden path and the wrens collecting seed two by two. We are but small calculated movements in time, yet no less significant for it. And reader, hes right where hes meant to be, in the great cosmic scheme of things, with this eye on you, the sparrow.

” Said the robin to the sparrow, ‘I should really like to know, why these anxious human beings rush about and worry so.’ Said the sparrow to the robin ‘Friend I think that it must be, that they have no Heavenly Father, such as cares for you and me’  “- E Cheney

Enjoyed reading? You can subscribe and be notified when a new blog is published! Just scroll to the bottom of the web page. You can also follow me on Instagram @islandwifehebrides  Please do take the time (if you can) to share this blog on any social media outlet. It only takes a few seconds but it helps the blog enormously!

From Scotland, with love, Lucy

12 thoughts on “Said the robin to the sparrow”