So high up on the mountain are we at Kyles that the view of the sea coming into land is panoramic, washing the fishing boats across the front of the house with the tide. Miniature. As they cut the great expanse of water. Circled always overhead by one or two gulls anticipating the days catch. The wind becomes so angry here we struggle to open the doors and darkness falls like a heavy theatrical curtain shrouding my eyes until it reopens. The darkness is black. Pitch. Expect a single aging street lamp quite some way down the path which glows when it feels like it. When its night, its truly night. I’ve never known such darkness. It can be terrifying. You could feel lost inches away from the house. Claustrophobic at the sheer weight of the night to your face. As a dear friend once said ‘Well it’s the edge of the world up there’. If Harris was the edge of the world and by gum does it feel like it then Kyle’s would be the place you stand and look over the edge before you fell off. However there is great comfort in Kyles and a deep one at that, in its raging winds and bitter darkness. There’s no edge I’d rather balance on. 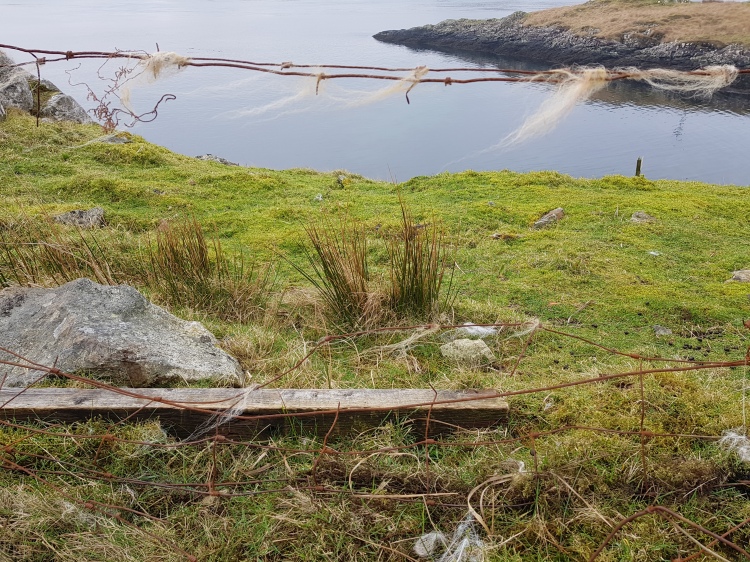 One of my favourite views in Harris is actually in the darkness. As you swing along the Urgha road Harris opens up across the water. Houses lit across the sea studded like jewels upon thick black velvet like little shiny bits of foil tightly balled. Lone standing houses, as most are in the Hebrides, beaconing light like randomly stitched sequins. It is not an awe inspiring sight. Nor does is show the mightiness or expanse that the Hebrides holds in its palm. But to me that view in the late evening is life in Harris.

The ominous gaze of a stag in the darkness, staring. ‘Can you see it, can you see it? A pair of eyes Lucy. There! There’s two of them’. Yes I could see it and I didn’t like it. Chris had spotted plenty of stags as he made his way home from the kitchen late into the evenings. I had not. The creature did not move. He wasn’t caught in our headlights he was standing up to them. His gaze never left me and it chilled me. I felt swirling darkness begin to stagnate around me.  His antlers, atop of two shiny currant eyes, stood like large branches spread upon his square face. I couldn’t quite place it but even in the darkness, half made out by man made light they made me uneasy. As the car began to roll onwards so did his gaze, until the night engulfed us both. For the amount of time I had longed to see one, I hoped there and then I never saw another one again.

One – early – morning. As there’s no other time in our house, as I stumbled to put Bea back into her own bed I lifted the blind at an attempt to gage what time it was. Its very easy to do that here. Life so prominent and unmasked by anything artificial is purely, well pure, and so I can by looking to the left determine by any slither of light where on the dial we are. It was however still swamped in darkness and so I guessed it wasn’t yet early enough for a cup of tea. I sighed. Creeping across an inky frame, without haste or noise. An luminous green light slowly crept into my line of vision. I realised much to my relief, once it dawned on me it couldn’t possibly be a radioactive sheep that it was a fishing boat. Guided into the great expanse by a single green lamp I thought how cold it must be. How the men early risen would still be wiping the sleep from their brows and clapping their hands together at the chill. Only for my mind to wander poetically as it does to the other side. How the sun would break over the line of the horizon. Blurring the space between earth and sky and how those fishermen sailing into it would be so close they could touch it. 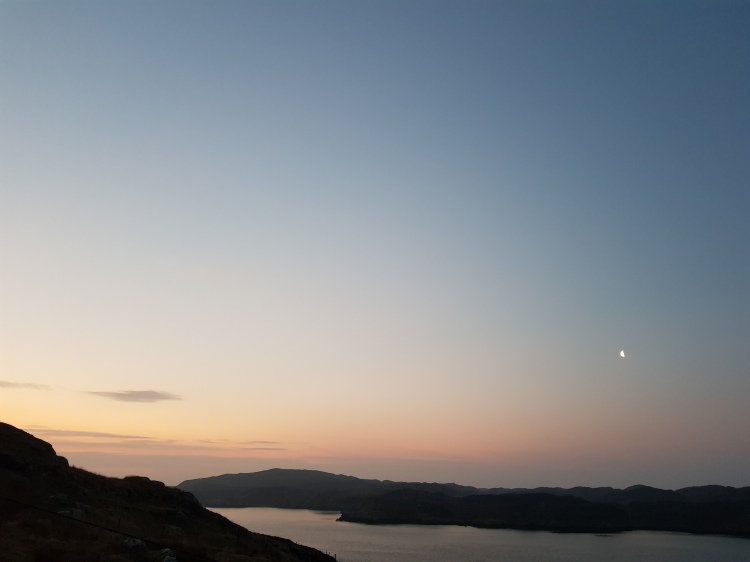 Kyles, where the wind blows wildly and the sun sits on the water like a large gold penny. Sometimes the waters lap mackerelled by the wind. On others it throws its self about as if struggling with a stubborn zipper. Where the sun creeps round the mountains in the early dawn throwing warm golden light over waving grasses. In the morning if heavy rain has fallen, long weathered stems stand tall laden with droplets like strings of crystals. Hundreds of thousands of them. Patiently awaiting the sun too thaw. One morning as I stood patiently myself the sun cast over them. I had never felt richer, for all the diamonds in the world could not have sparkled such a beautiful light. I savoured it. I shall never be rich and thankfully so. I’ll never count the pennies but by gum, I’ll always count the dew.

Surrounded by crofting land. The house at Kyles is dotted with the ruins of crofts from long ago. Made of earth, stone and bare hand. It is a constant reminder that the present will one day turn to dust – or moss – and we should not hold too steadfast to that which does. One croft in particular still has a very small low cast iron stove in it. Now padded with thick soft earth, it would have once been life sustaining to those who breathed the fire into it. I stood and leant against the rough window ledge looking out onto the view. A beautiful one. Yes, changed since those who lived here had seen it, but not by much really. Nothing changes too quickly in Harris. Maybe that’s why people like it. Man made light has not overly invaded and natural darkness reigns supreme. The stars, numbered. Each called out by name invading the skies like an ever ready army. What a magical place. Mundane, ordinary, nothing happens here. Though sheep occasionally have a scratch on my washing line poles. What more could you want than that? What more is there? We like to think our life on earth is technicoloured. Its not. Its much simpler than that. Black and white, day and night, light and dark. Its in the comparison that the shiny bits are birthed.

To those who find the light amidst the darkness.

6 thoughts on “To all the shiny bits”