It is a truth universally acknowledged that the end of a rainbow is a hard thing to grasp hold of – but seeing one – that’s a different matter. My favourite time to go a walk here in Tarbert is very early on a Sunday morning. Bundling the children into the pram – still pyjama clad – I step into a world where only myself and my two children exist. As I wander slowly down to the waters edge, the sun like clockwork will meet me for company and it is here I usually have a thought or two. One particular Sunday as I turned from the rising sun of the marina into west Tarbert the rain began to shower and there through bare trees was the end of a rainbow. I think children are like rainbows, something precious created when two opposites meet and rainbows very much like children have many hues and tones in which they are created. When a child is born a world is born. Some worlds are packed with colour and some hold only the faintest hint of a paintbrush. Some hold lashings of rain and others hold happy downpours for puddle jumping. Regardless, these colours need nurturing and nurturing a world you may or may not understand and learning how to is possibly the hardest task of all. 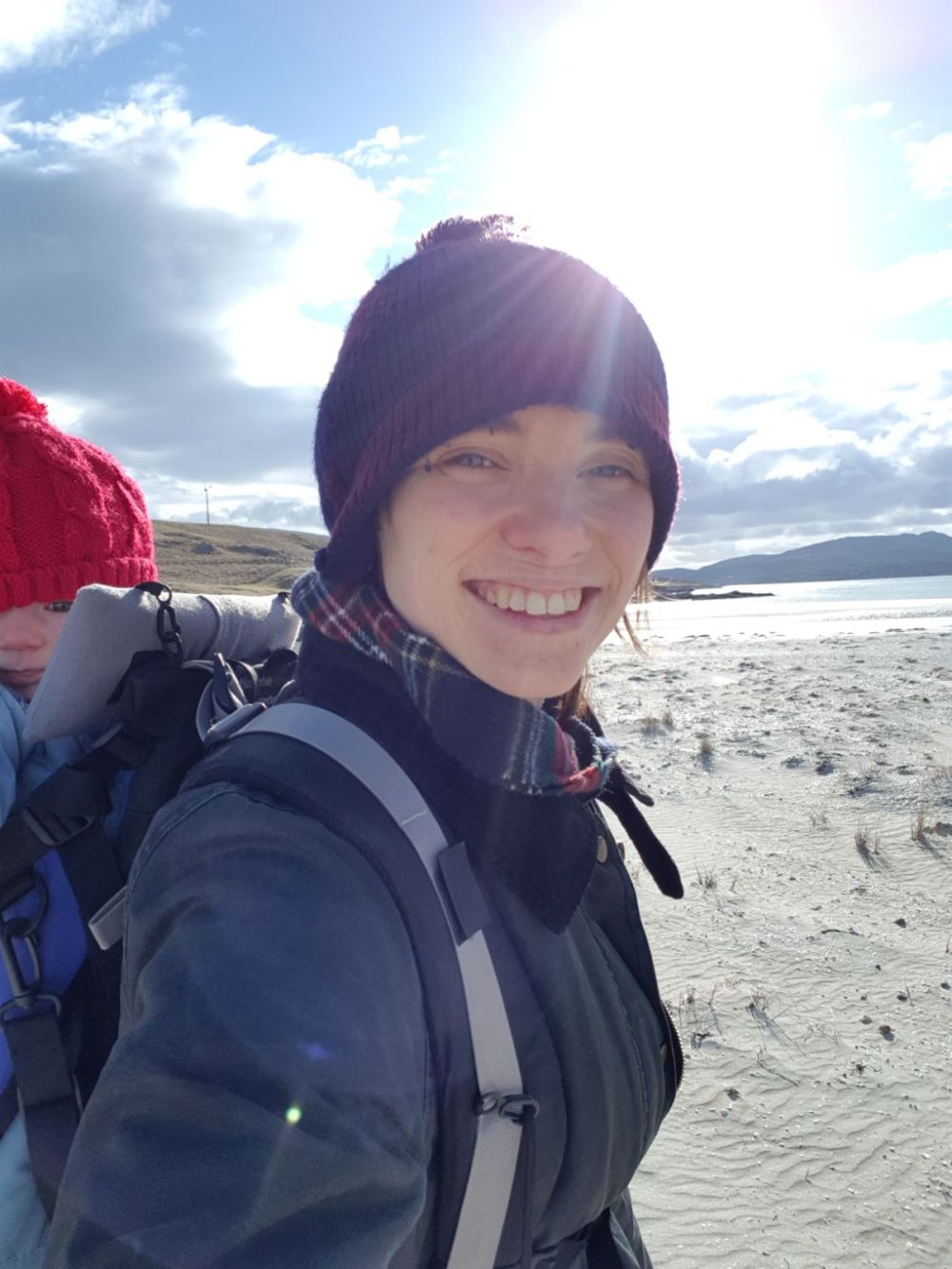 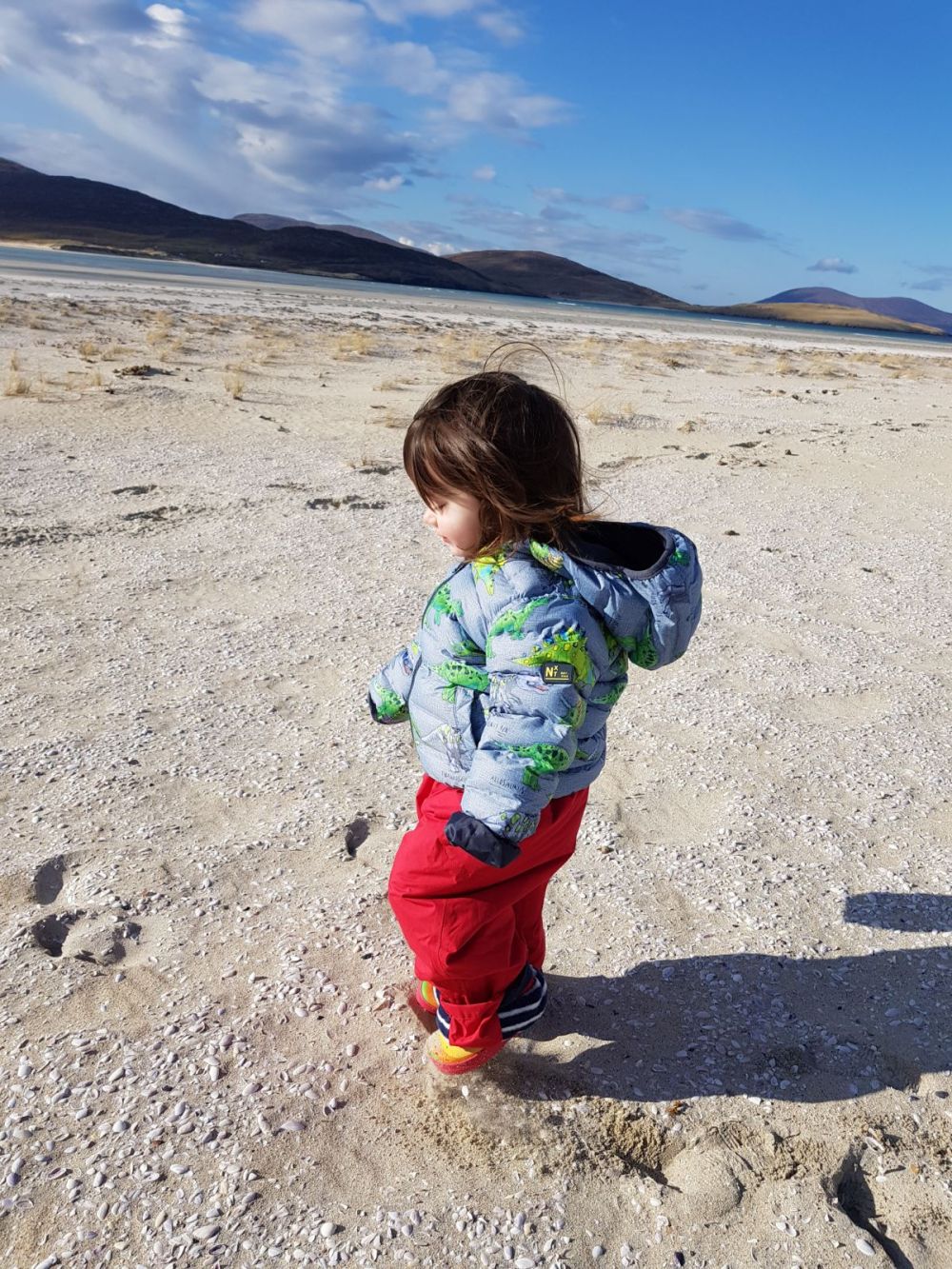 Over the last few months , as I waited for my misplaced voice to catch up with me, I’ve had to also be the voice for a child who cant navigate the colours in her world with as much ease as those around her. It was during this time that I received a message from another mother. Living down south she was pleased that I had come into contact with her daughter here in Harris and she thought, after reading about my thoughts and adventures that I was heaven sent. Those two words really stuck with me and for the following days until Katy’s arrival they wandered around with me. I couldn’t give reason as to why they were pottering around my head but nor could I ask them to go and do something else. It wasn’t however until Katy stood in my kitchen – holding baby Evelyn in her strawberry hat – as I placed tea bags in cups and walked the everyday steps to retrieve the milk from the fridge that I knew in my heart, for a fact, it was Katy who had been sent to me.

There’s a gentle hum of activity building in Tarbert as we head towards the Easter weekend. Holiday cottages are being white washed and doors newly painted and there’s unfamiliar faces to say hello and smile at. After seeing wild spring flowers emerge around the place and even a colourful pot or two I swiftly ordered four window boxes and chris found a homerun nursery down in Grosebay next to the water. Run by Johan who kindly told us to let ourselves in. With large pots and old sink planters to the right and rich feathered chickens to the left, I lifted the latch on the sky blue picket fence and stepped inside the small polytunnel. With stringed bunting and clusters of vibrantly flowering bedding plants, I  loved the nursery. It was like a small piece of home for me. Picking out flowers and inhaling the heavy scent of newly awaked spring. After picking out six trays of velveteen primroses with rich yoked centres and snowy pinked bellis. I bid a farewell to the happy sodden hens and headed off once again into the rain, in the direction of the house we were making a home. 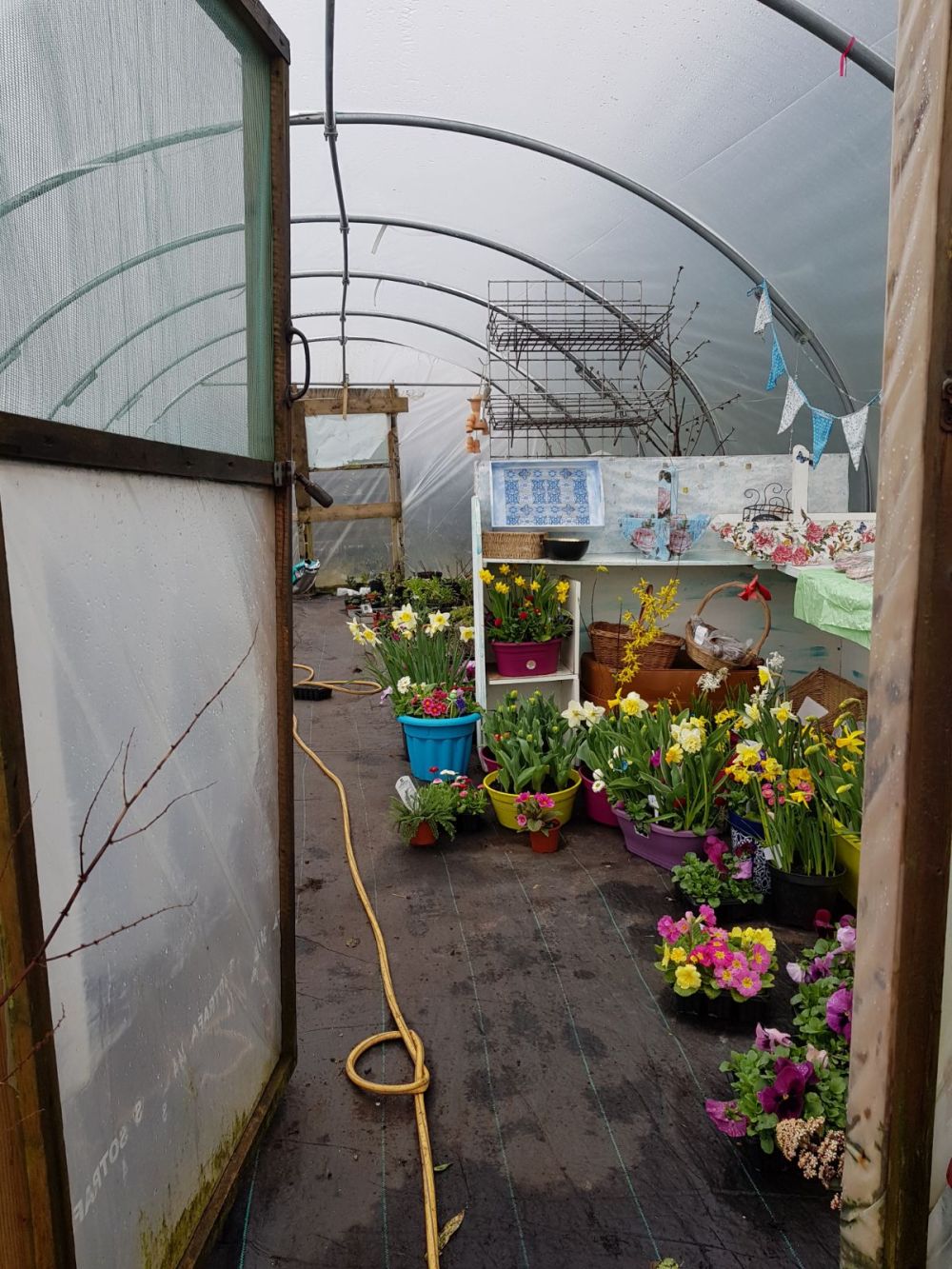 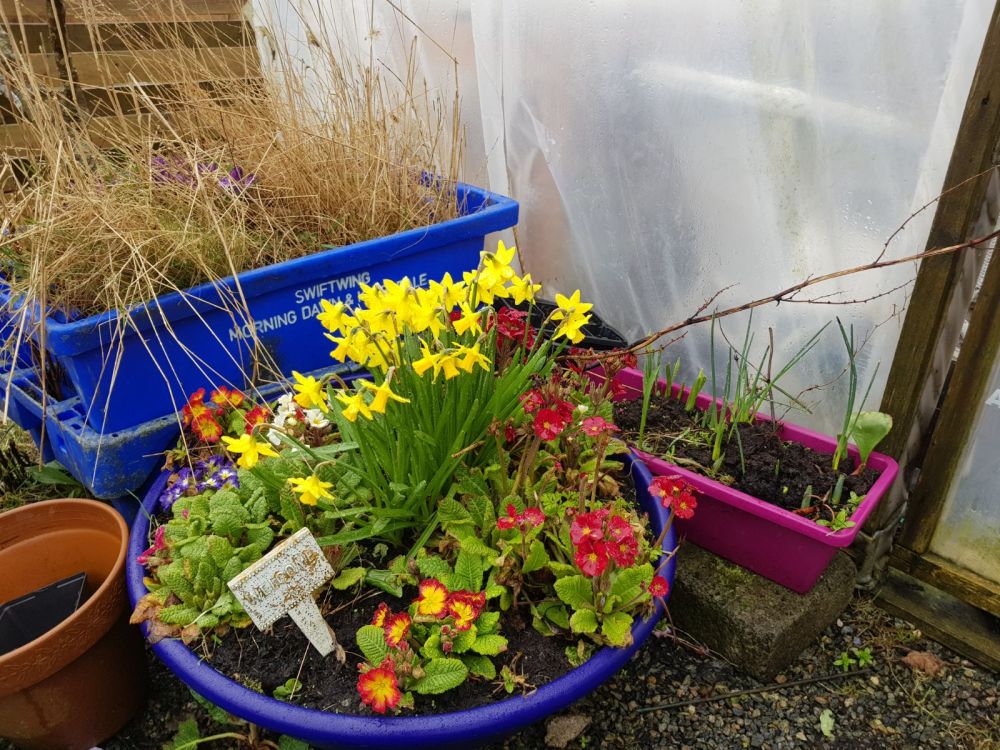 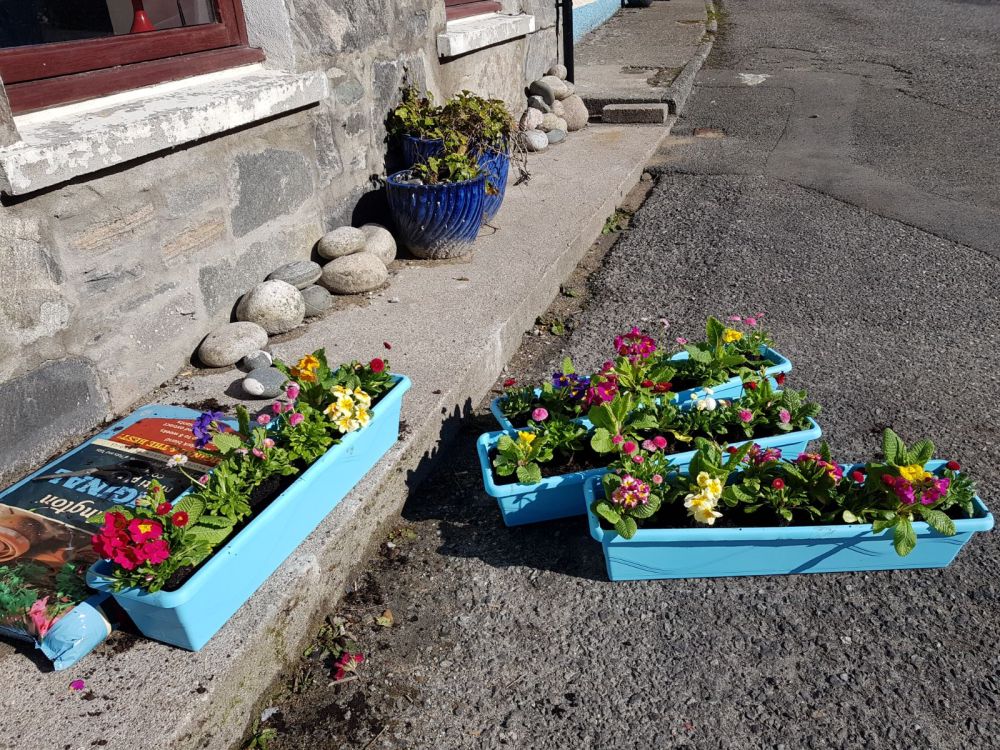 I’ve come to realise over the past handful of months that the people who live and work in the Outer Hebrides are a particularly enterprising bunch. From homerun businesses set up in practical and heart warming ways. To small holidays cottages and crofters with honesty boxes for eggs. To bigger ideas such as the Isle of Harris gin distillery. There’s an abundance of clever ideas out there and I think it is one of my favourite things about the island that I didn’t anticipate. One of the businesses is Croft 36, run by Julie, Steve and their daughter Ellen. They sell Hebridean produce from venison to seafood in a small crofting hut. I have immensely missed freshly baked bread whilst on the island and on entering Croft 36 not only did I realise there where freshly baked loaves, I realised to my absolute delight that they were in fact still warm! There were jars of jewelled homemade marmalade that I’m sure would deliciously melt when applied to hot buttered toast. Curries, stews, and huge pasties with glistening pastry. For which you’d need both hands to eat and they made me think of my mum. On closer inspection I saw that their packaging was both biodegradable and recyclable, something we should all, no matter no big or small be passionate about. We built ourselves a small feast consisting of one, still warm, freshly baked loaf. One cheese and leek quiche. A rabbit and dumpling stew and one scone so big I considered it a feast all one its own. 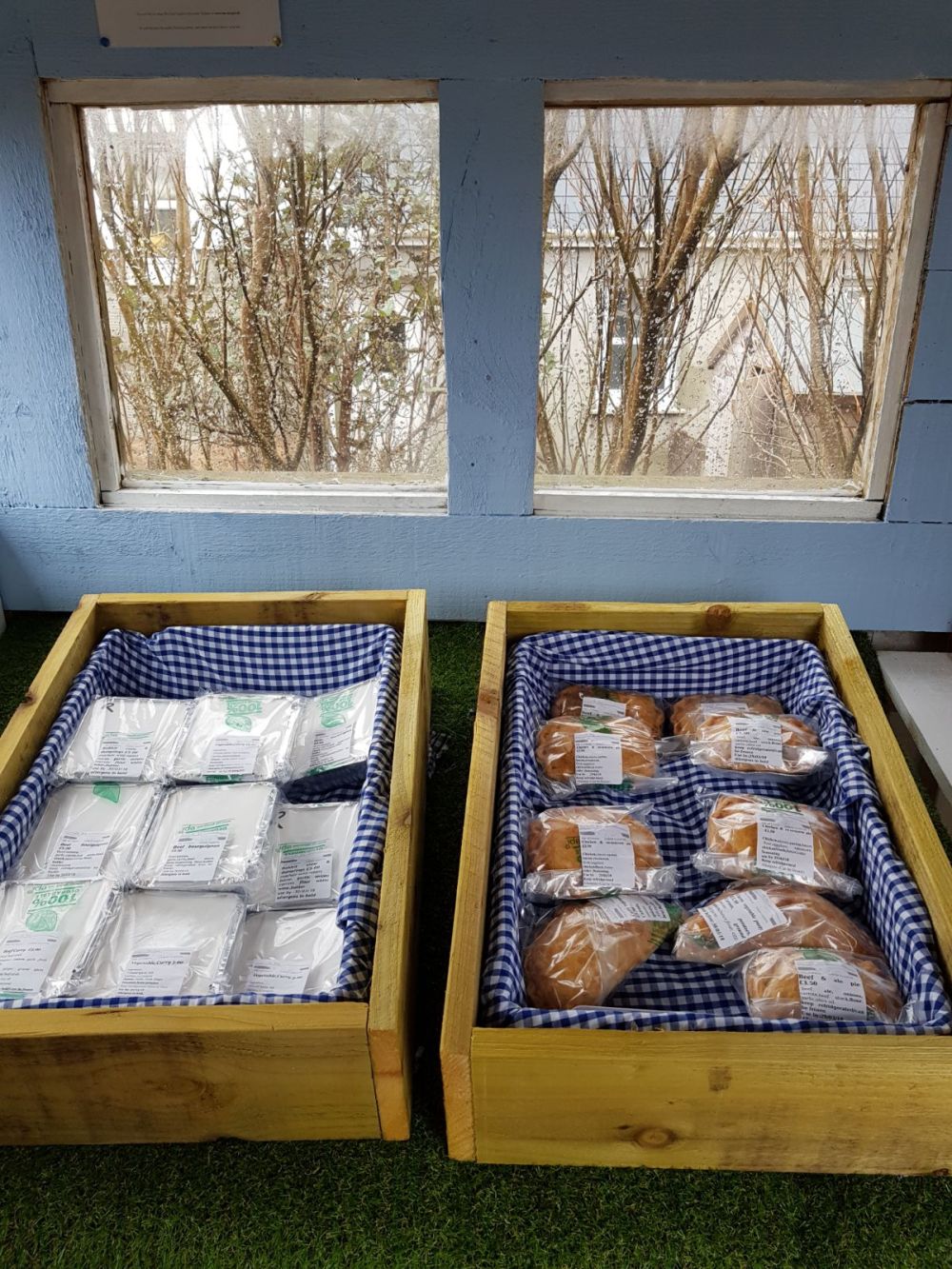 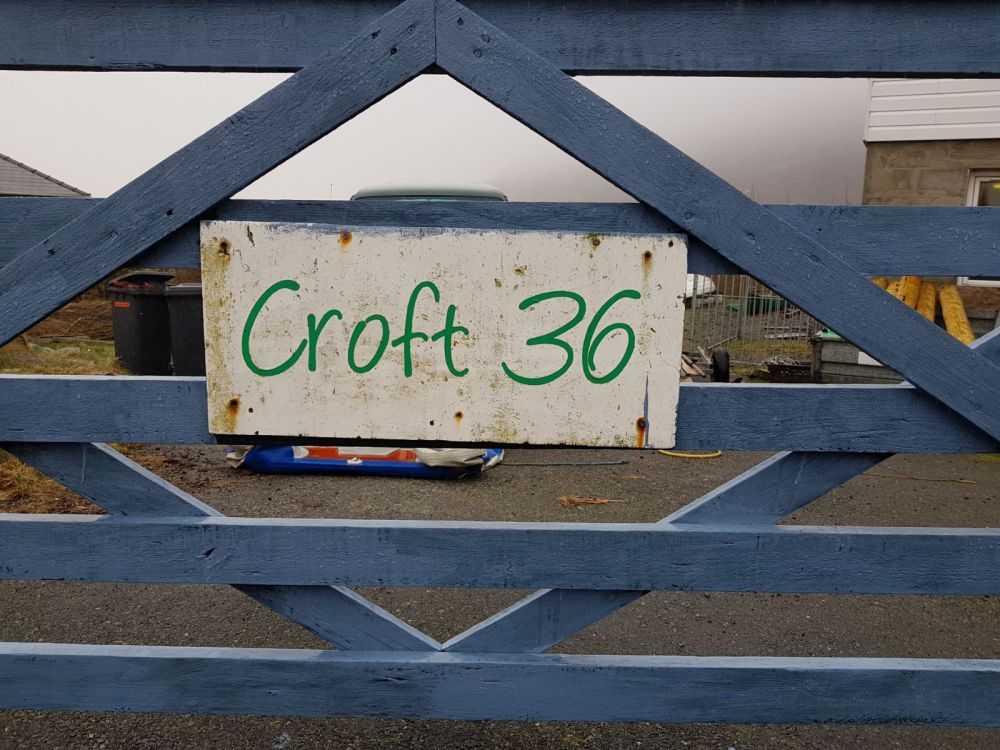 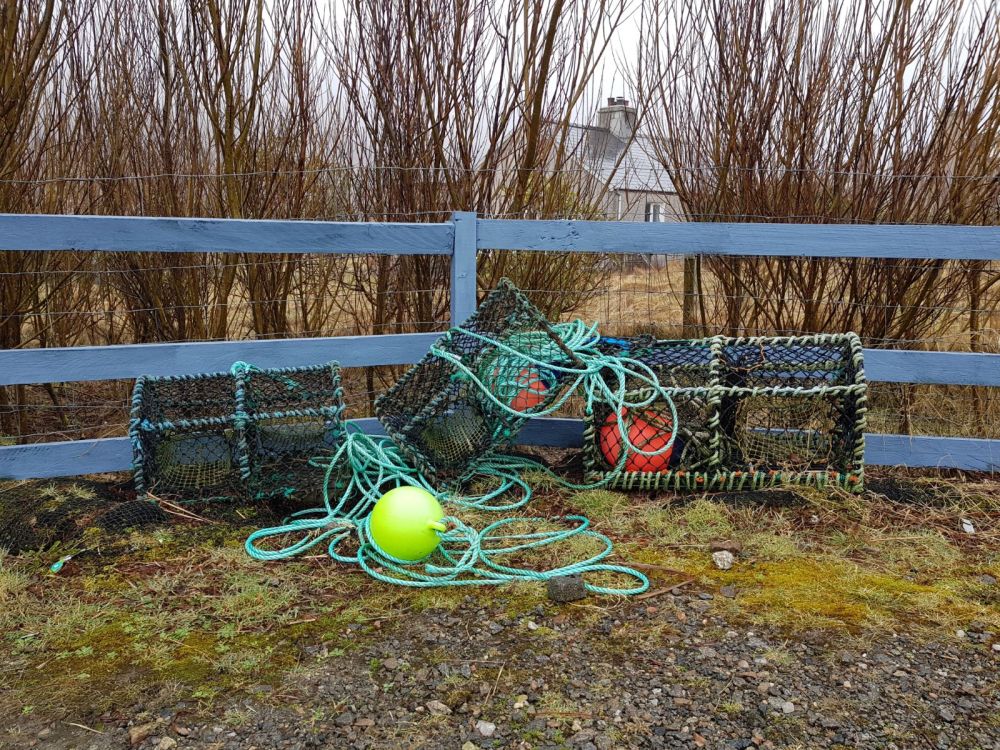 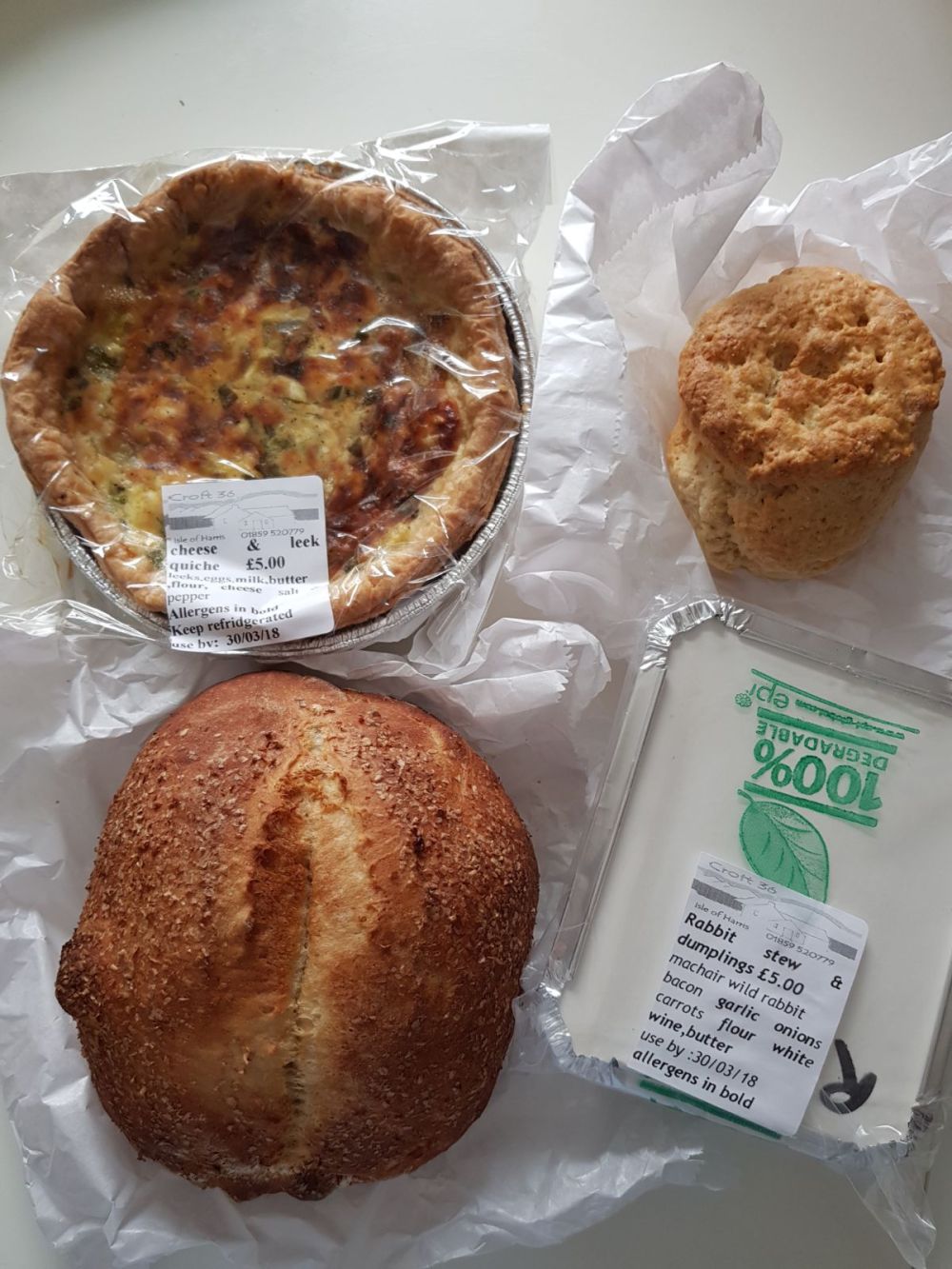 A few years ago I had the choice of either taking a place in London to study fine art or follow early blossoming love. I am without a doubt my mothers daughter and my mind made the choice to follow the heart. A handful of weeks later I realised that in fact the choice I’d made had had little to do with my mind, as Bea, like everything she does was about to surprise us. Before that I didn’t see myself as a mother, in fact I saw motherhood as a sort of dilution rather than an addition. My greatest accomplishment was to create things. To leave something behind that would inspire, and, like many things we ask for in this life that’s exactly what God granted me. Albeit in the form of children rather than canvas. Bea turned two this month and as I ordered things for her birthday I wondered as to what time and day would suit me best for delivery. When was I going to be out? Was chris working that day? Only to laugh at the realisation that I was in fact wasting my time. Firstly it had to board the ferry and secondly it didn’t matter to what day and time it arrived. It would get here when it got here. There seems to be no such thing as royal mail red cards here. The postman simply knows you, opens the door and puts the post inside. In Harris, you’ll never miss your post. To mark the occasion we all headed down to Luskentrye. A clear but cold morning we stopped the car before the last croft as we realised the two grey horses were out and grazing on the dunes. Its a truly magical sight and I suspect that even when lived for a number of years it will never drain of colour. I smiled at the thought of all those arriving for the coming season. Who, when exploring the beach will stop to double take and exclaim at their luck in finding two grey wild horses to talk to. As we walked along the beach – Noah on my back – there was a constant crunch as tiny shells broke under our feet. Like tiny jigsaw pieces waiting to be played with. As I looked out towards the shore line, so covered was the sand in pearly white fragments I could of sworn it was light dusting of winter snow. 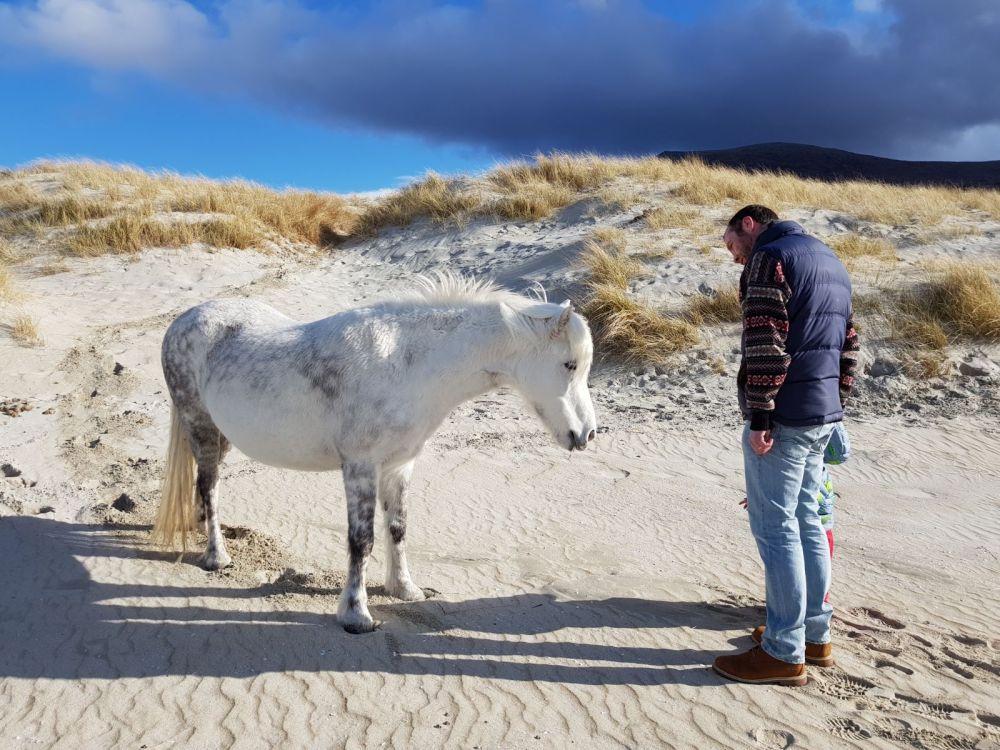 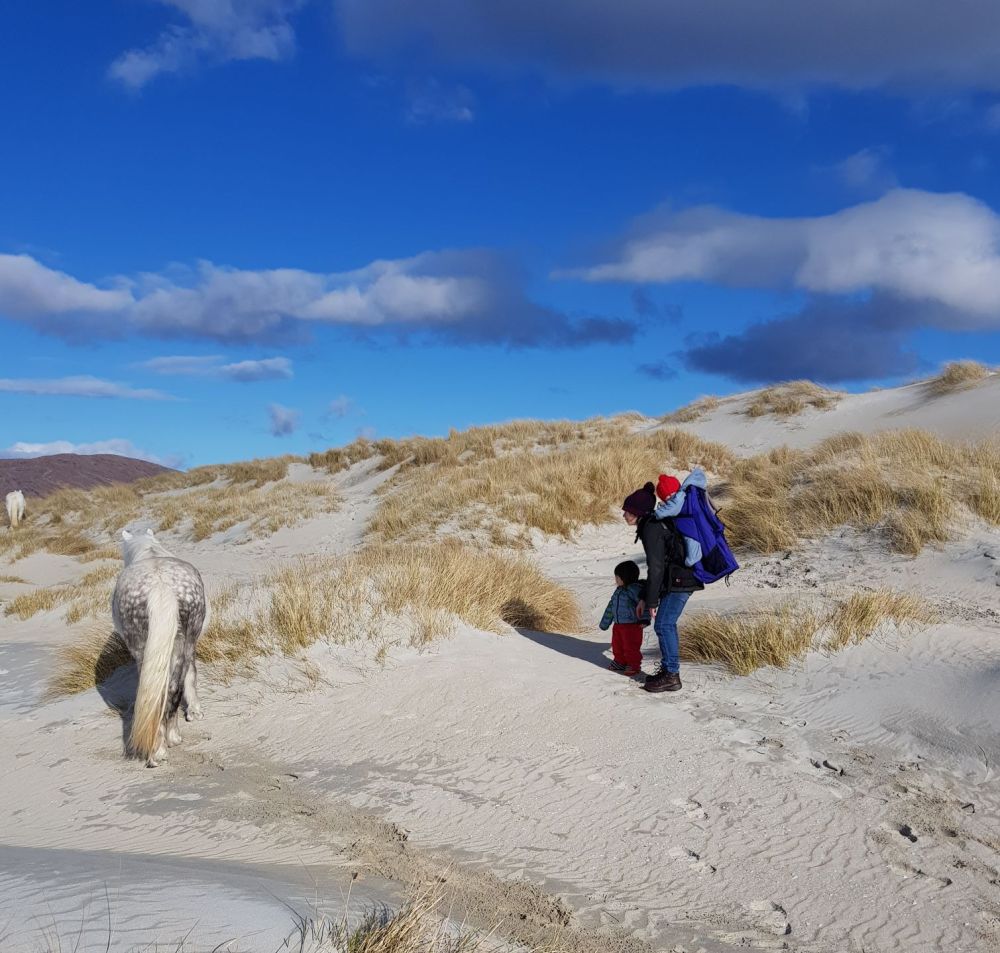 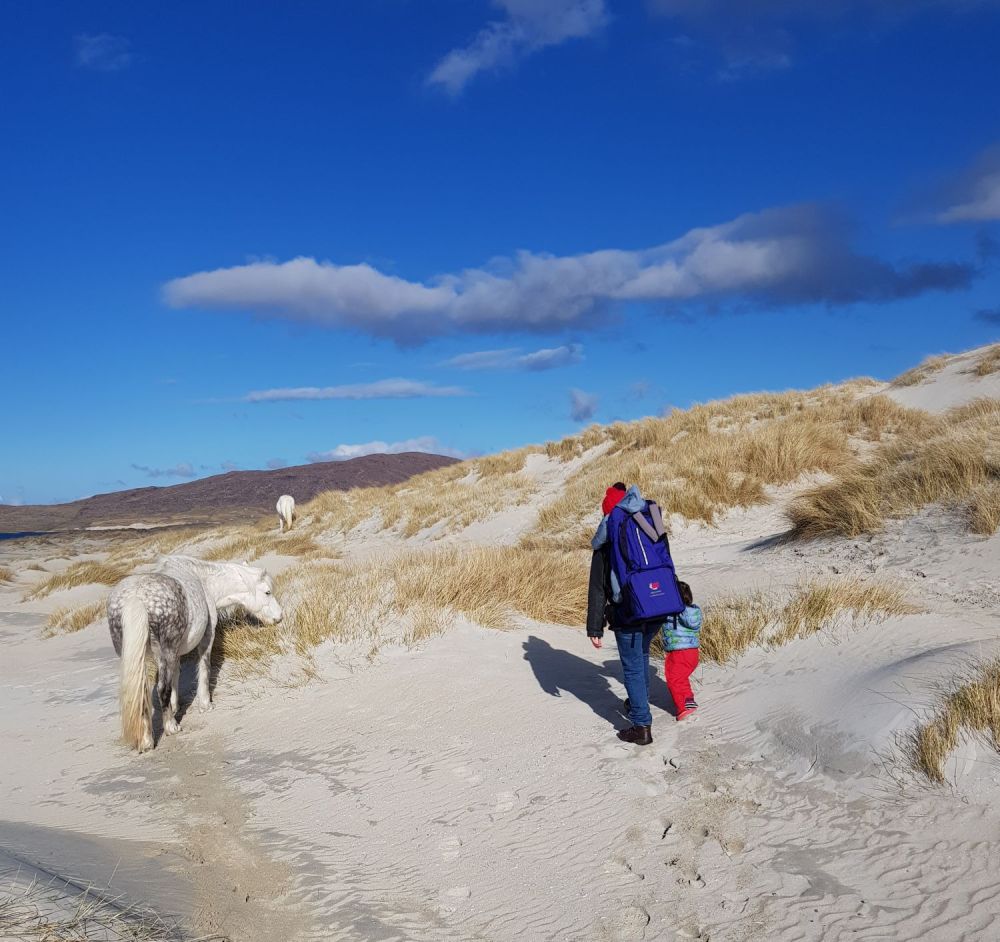 Bea and her colourful world has taught me more in the past two years than any other being or book on this planet. A deeply challenging child. The last two years nurturing and understanding her world have overflowed with both joy and frustration. Not only have I had to learn how to be an autistic parent, I’ve had to learn how to be the parent of an autistic child. There have been times in which she has pushed my mind and body to its absolute limits and I have wanted and willed to give up over heaving sobs. But parenthood and its many colours does not work like that. Slowly but surely a new day, everyday, will rise. As I walked through the cold spitting rain on that early Sunday morn, pointing out the colourful collision of rain meeting sun. Beas eyes, gazing at one of the earths everyday natural wonders, brimmed with amazement. As I stared into her small round face it occurred to me, that maybe our greatest accomplishment on this earth wont be something that we do but someone that we raise. And maybe, if we’re very lucky, we’ll see every colour of the rainbow.

To Bea and all her colours.

All our love. Lucy x

3 thoughts on “To all the colours of the rainbow.”