At eleven pm in Tarbert the street lights turn off. This was quite new to me, and when chris mentioned it, I sat with my face pressed up against the glass, batted breath, waiting to see if the lights did in fact go out. They did. You may think that’s a little odd but there isn’t really enough people or traffic to warrant them being on at night. And although it sounds a wee bit mundane it is in fact a rather magical experience. One minute you can look outside and see the outline of the mountains – and then its black – pitch black – cant see in front of your face black. I felt akin to Roald Dahls Sophie in the BFG. Very small, awaiting a dream to be blown through the window by large eared giant about to sweep me under his cape. I do have rather a vivid imagination and so like Sophie did I feel, in dressing gown curled against the window, that I was afraid to open it for fear that I may just well be. Childhood adventures aside one thing this enables you to do is see the stars. And stars their are plenty. Quite a few times now, over pyjamas I have pulled my bright yellow fisherman wellingtons, bobble hat and coat. To be greeted with the sharp sting of the cold upon my cheeks as I have stepped out into the inky blackness in search of a twinkling cinema screen. Of course, like anything, there are times when no matter how tightly I squeeze my eyes they don’t shine through. There’s snow in the air, the cloud is too thick or its moving at a pace which blurs your focus. The important thing is though, is that they are there. Regardless of what your eyes take in, they are. I have a dear friend who’s like those stars. I never see her but I know she’s there. In fact over the years I’ve never actually met Jennie in person. That may seem a little strange, but sometimes if your lucky enough you can come across someone who makes such a positive impact that you don’t have to be with them to feel it. Just like clouded stars, I don’t have to see her to know she glows.

All over the island signs of spring are visible. The lambs are due any day and as you walk, patiently awaiting warmer days, tall green stems cluster at your feet. In the early mornings as we walk our way to West Tarbert – just behind the school where the tide comes in – the cold air is heavy with a newness that any day now will take hold. Its a brave season spring, embracing the landscape its been left like an old friend. Edging its way through the sharpness of the winter – advocating change. Along with the spring our first visitor from mainland arrived this past week. The concept is an odd one to get your head around. Mainland. Sometimes I look out of the window and the fact that I’m in the outer Hebrides momentarily stuns me – but its only fleeting – for most of the time I have no feeling that I’m cut off from people. Grandad Martin, ‘Papa’, sailed in on the evening ferry with myself and Bea waiting in the big bay windows to wave him in. I could hear the gentle hum of the ferry even over the delight of Bea as she stayed up past her bedtime and it wasn’t long until the cars began to roll by and her Papa was opening the door. Talking about all the bits and bats to which he’s rather partial. 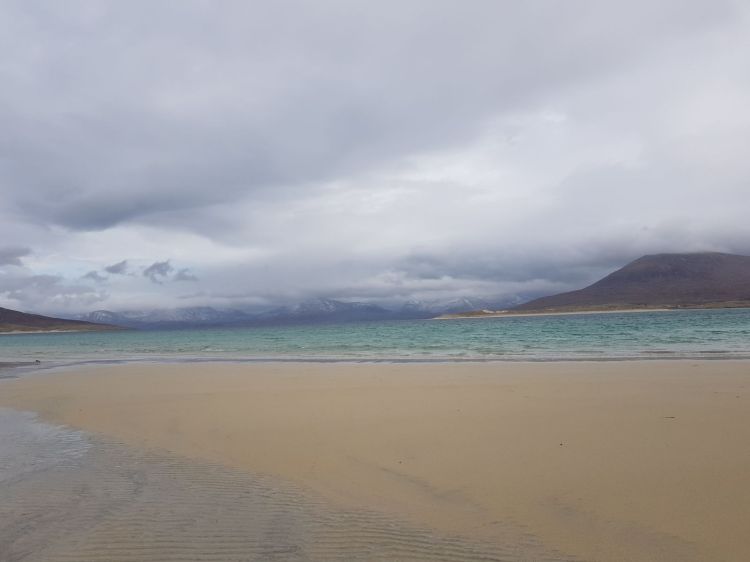 It was exciting having a visitor to the island and showing them all the beauty that your living beside. We travelled out to explore Horgabost beach – opposite Luskentrye – you can still see the snow capped mountains but its a little easier to get onto. The wind was cold and sharp and after a few minutes chris took Noah back to the car to thaw out. I’m always surprised by the deafening sound of the Atlantic waves. Only when you are back in the quietness of the car do you realise how loud it is. The three of us walked along the shore line marvelling at the colour of the water and rubbing our hands at the cold. Then when we weren’t brave enough to bare the cold any longer I ran back to the car picking up shells and funny bits of wood as I went. I have always loved the sea. I’ve always painted it with its many shades , for myself and sometimes others, whenever life has let me. Behind me was a tumbling Bea, every so often being picked up by the large hands of her Papa. Placing her back solidly on her feet – steering her in the right direction – as grand parents do. 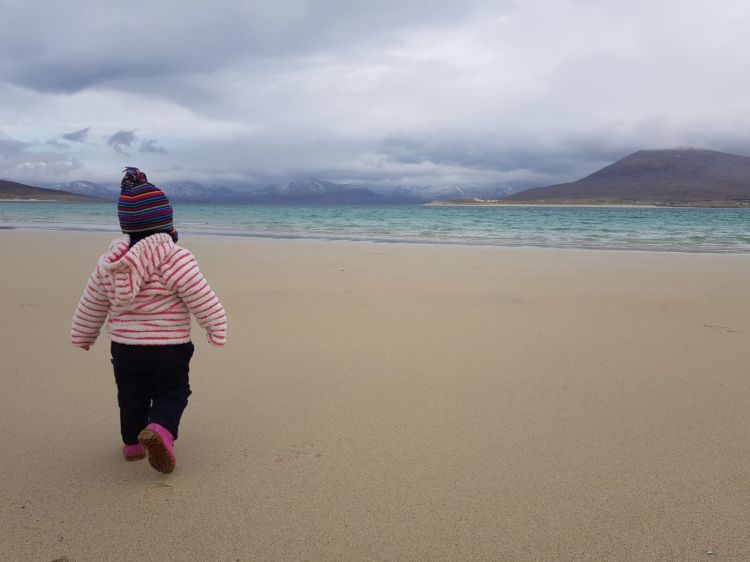 I think one of the main things I’ve taken from my friendship with Jennie is that just like the spring sometimes we have to be brave and push through. You may already regard me as brave but I’m not talking about the big leaps, I’m talking about the little leaps. The everyday hurdles that you tell yourself you cannot meet. Like opening up your front door when you’ve had a bad day, or getting dressed when you feel like you’ve forgotten how. My name is Lucy, and I’m anxious. I never used to be but once I had children the world around me slowly became a different place and like a toddler with untied laces I couldn’t quite place my feet. Like dark circles and a softer tummy, it is one of the marks that growing and raising children can leave. I contemplated on the arrival of our move if it would be blown away with the strength of the wind. But of course, the head on my shoulders would not change, regardless of geography. I used to feel ashamed, I used to feel ashamed about feeling ashamed. What did I have to feel anxious about, but anxiety doesn’t work like it. Regardless of the quantities in which you have your blessings it will strike you through an opened door or it will quietly follow you around so you’re unaware of an extra passenger. I’m not entirely convinced that there is such a thing as anxiety removal anyway. I think instead you need to learn to pat it down, quiet whatever it is in your mind that’s too loud to hear over. Run along the beach when you can and marvel at the world within a grain of sand. Paint and grow, ‘even if its just a little lettuce’. And just like the spring embracing its old friend we should not be ashamed of the changes in our landscape after we have children. For even when its skies are a little clouded, there’s still a star, behind there, glowing.

To Jennie, the brave.

You can now find me over on Instagram @islandwife_hebrides for daily uploads of life in the Hebrides as well as live videos of our family adventures.

15 thoughts on “To spring, the bravest of seasons.”